Presenter(s):
Roberto Simon
Wednesday, April 7, 2021 - 15:30
Roberto Simon discussed his book, "O Brasil Contra a Democracia: A Ditadura, O Golpe no Chile, E a Guerra Fria na America do Sul," which focuses on the role that Brazil played in the cold war and how the Brazilian Military Dictatorship sought to influence regional affairs, including Chile's own anti-democratic struggles.
Roberto Simon is a journalist and political risk analyst focused on Brazil and Latin America. Simon was a columnist for Brazil’s Folha de S. Paulo daily and Americas Quarterly, and a Senior Director of Policy at Americas Society / Council of the Americas. Previously, he worked as the lead Latin America political risk analyst for FTI Consulting. Simon for a decade as a foreign correspondent with O Estado de S. Paulo, covering events across Latin America and in the Middle East. 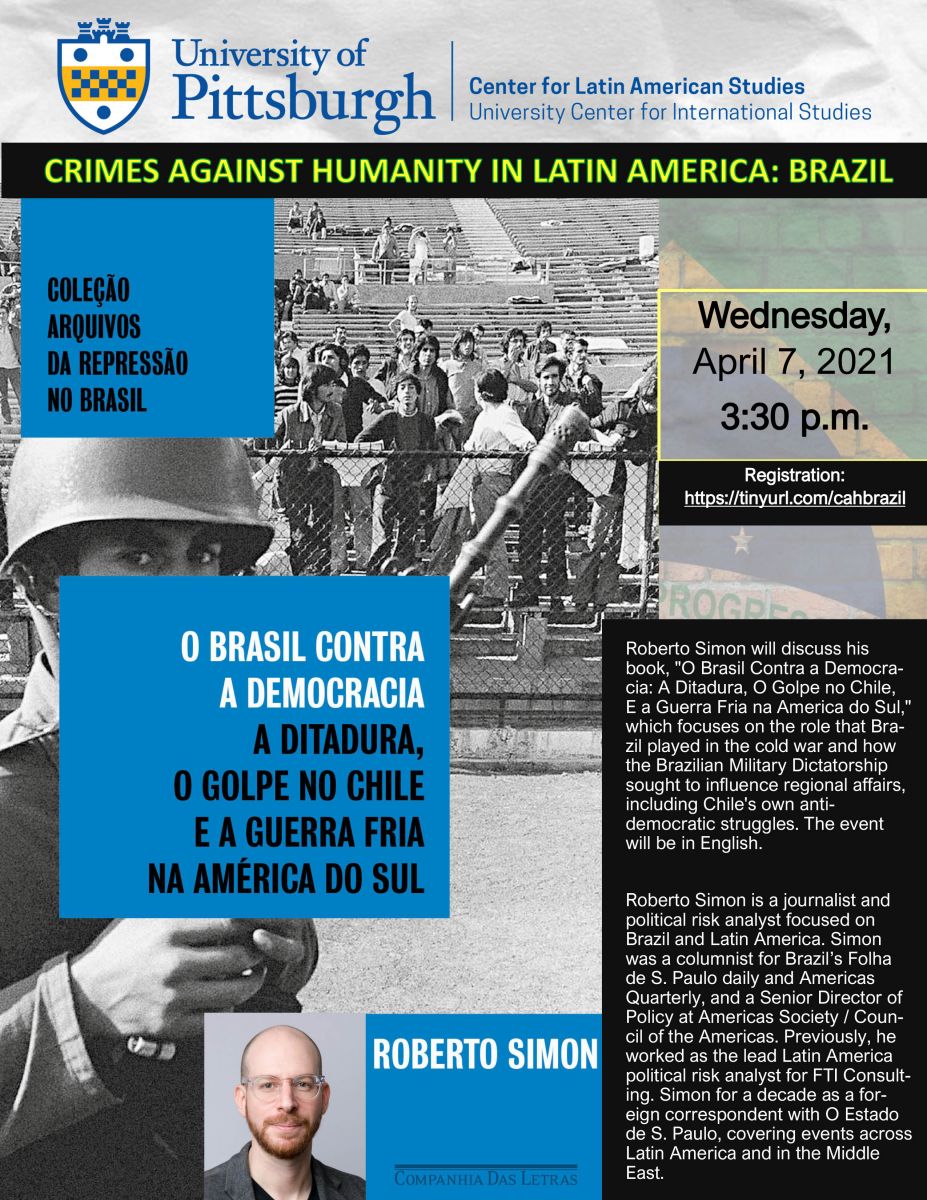 As part of CLAS' Crimes Against Humanity in Latin America Series, Adriana Miramontes Olivas (Pitt PhD candidate in the History of Art and Architecture Department) gave a presentation on "Del Femi-Juvenicidio al Neoliberarchivo: Art, Archives, and the Pursuit of Human Rights - A discussion on Femicide along the US/Mexico border." The event took place on International Women's Day to remember those women who have been killed. 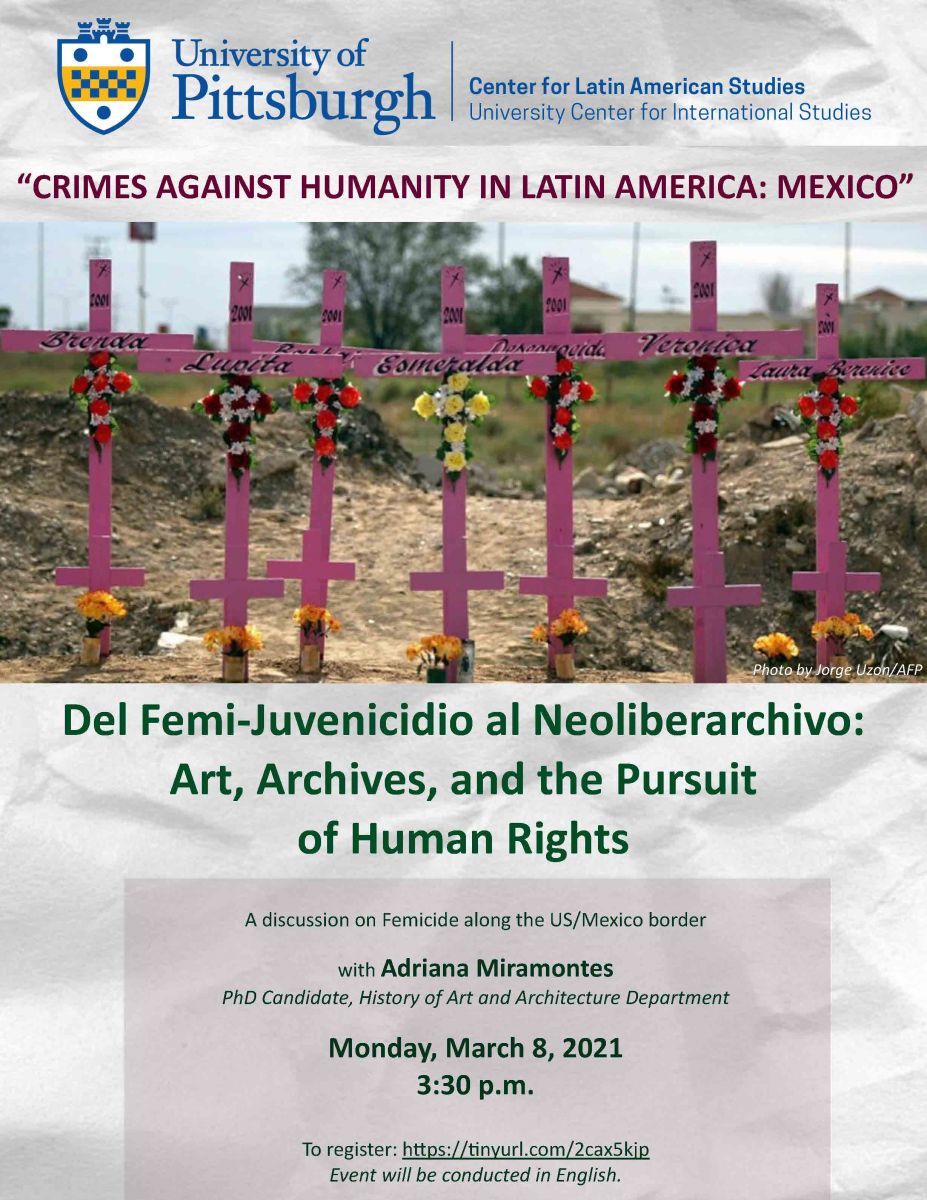 Presenter(s):
Pedro X. Molina & Mario Sanchez
Monday, January 25, 2021 - 18:00
While the CLAS @ Pitt Crimes Against Humanity Series previously focused on well-documented and covered crimes and government policies in the Southern Cone (Argentina, Chile and Brazil in particular), more recent, ongoing issues involving large-scale dynamics are ever more important. One such case is Colombia and the worrying trend of targeted assassination of community activists involved in the transformational potential of the Peace Process that commenced with the 2016 Peace Accords of the Santos administration (2010-2018).
On February 25th, acclaimed editorial cartoonist Pedro X. Molina (in exile in the United States) and UCA’s Mario Sánchez, a Social Scientist, reflected on the events that followed the student protests of April 2018 in Nicaragua, as well as the antecedents and the political and social context within which their echo has impacted daily life in the country. 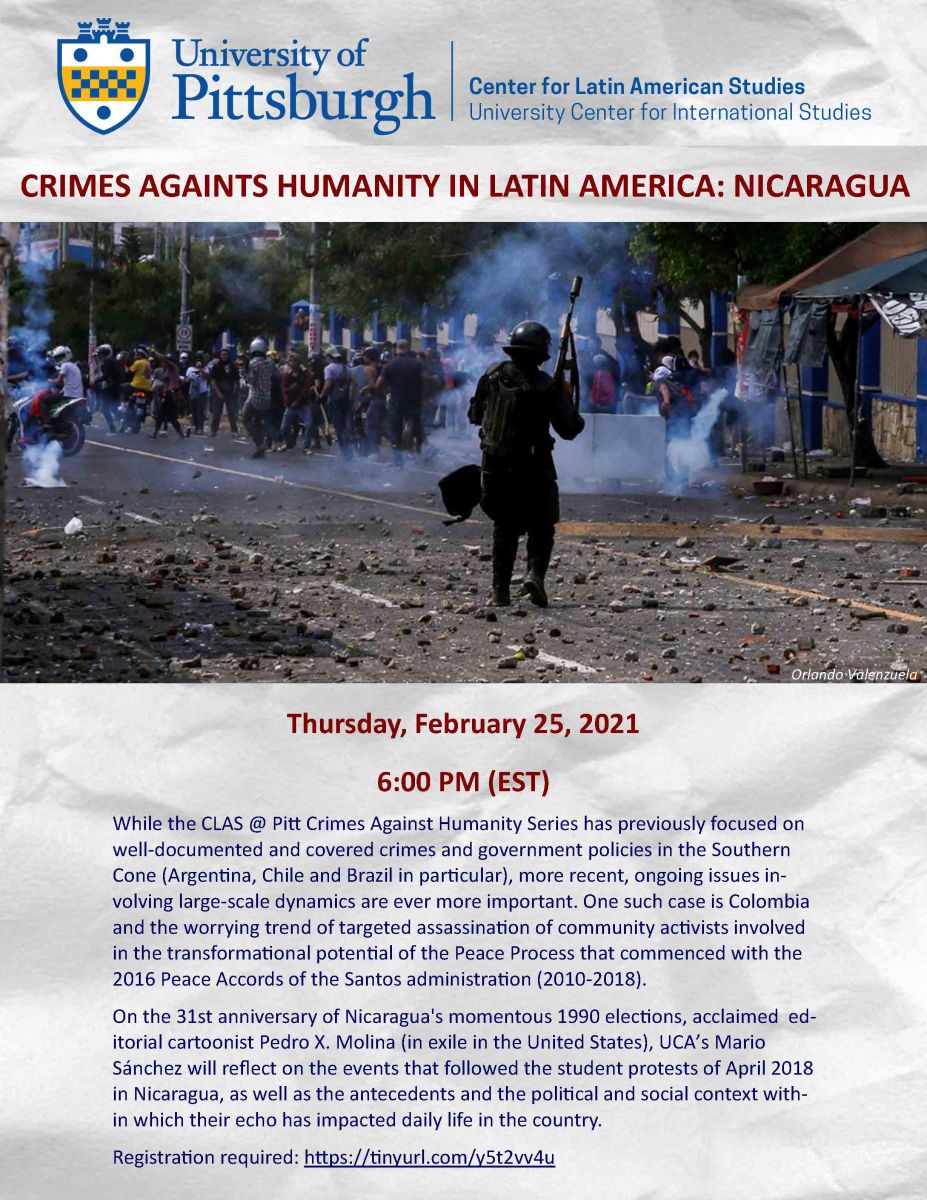 -Directors of the film

Sebastian Cuellar gave a talk on Crimes Against Humanity in Colombia.