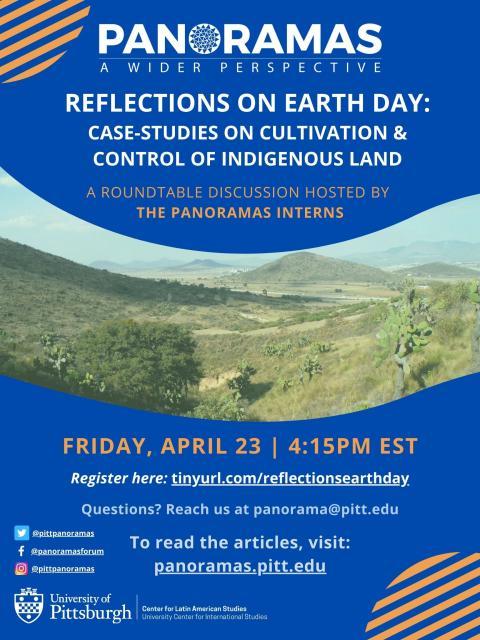 As a celebration of Earth Day and some of the planet's most vehement protectors, join the Panoramas interns in a presentation of case-studies of Indigenous peoples' relationship with the lands they inhabit. Starting with Prehispanic Latin America with Indigenous agricultural practices, and the impact of early globalization, the presenters frame centuries of land abuse and impact of colonization on aboriginal including:

Industrialized agriculture and economic growth pose a serious threat to sustainable practices at The Cerrado, a vast and relatively unknown Savannah in Central Brazil being decimated at a rate roughly four-times faster than the Amazon deforestation.

The beef industry is responsible for most of the deforestation as well as the murder and displacement of thousands of Indigenous people In the Amazon, raising serious concerns about its long-term sustainability.

Climate change in Latin America impacts Indigenous peoples’ spiritual connection to land, leading to worse mental health outcomes among their communities. The Mapuche, an Indigenous group that live in Argentina and Chile, have been fighting for autonomy since the invasion of the Spanish to the Americas.

Afro-Indigenous populations, such as the Garifuna, play a pivotal role in sustainability in Latin America as their respect for the land they inhabit is integrated into their cultural practices.

By challenging western ideas and exploring past and current confrontations between people fighting for their land, we are faced with questions about our role.