The Political Economy of Exchange Rates in Latin American Economies 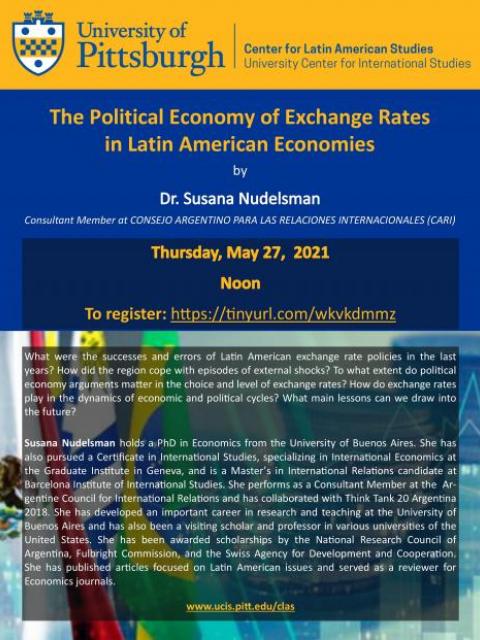 In a globalized world, the exchange rate, while expressing the exchange ratio between the currency of a country and the rest of the world, is a key price that affects nominal and real aspects of the economies. The issue is particularly complex in the developing economies that are subject to both the challenges of their internal variables and those of external financing cycles and commodity price fluctuations. Moreover, in the globalization process, prolonged misalignments in exchange rates have been associated with severe financial crises. No less is the impact of the exchange rate on the rate of inflation in these economies.

The presentation will focus on both economic as well as political economy arguments of exchange rate policies. While the traditional approach is typically dominated by the analysis of only economic factors, the more recent political economy point of view includes the behavior of different players involved in the political game. In this regard, exchange rate policies can be understood in terms of the distributional and electoral motivations that determine the regional policymaking. This approach highlights the need for considering the impact of interests, interactions, and institutions in the analysis of the topic.

Susana Nudelsman holds a PhD in Economics from the University of Buenos Aires. She has also pursued a Certificate in International Studies, specializing in International Economics at the Graduate Institute in Geneva, and is a Master’s in International Relations candidate at Barcelona Institute of International Studies. She performs as a Consultant Member at the Argentine Council for International Relations and has collaborated with Think Tank 20 Argentina 2018. She has developed an important career in research and teaching at the University of Buenos Aires and has also been a visiting scholar and professor in various universities of the United States. She has been awarded scholarships by the National Research Council of Argentina, Fulbright Commission, and the Swiss Agency for Development and Cooperation. She has published articles focused on Latin American issues and served as a reviewer for Economics journals.