Thursday, October 25 to Wednesday, May 1

Travelers Along the Silk Roads: 10th Century to the Present 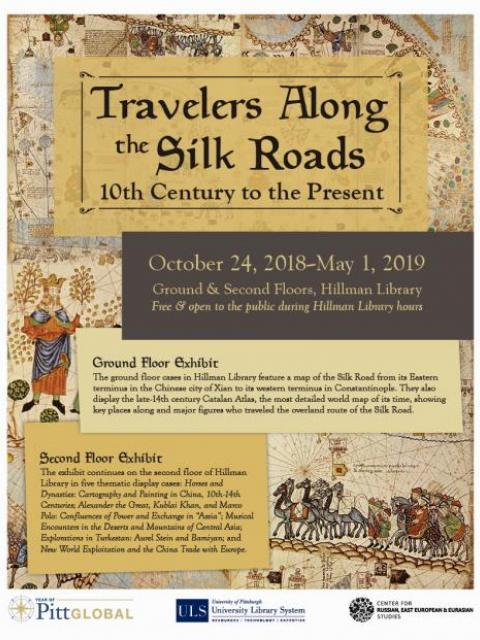 Free and Open to the Public during Hillman Library Hours

The term Silk Road, coined by 19th century German explorer Ferdinand von Richthofen, refers to a loose network of overland trade routes stretching from the Mediterranean to East Asia. Textiles, gems, spices, animals and even religions were all exchanged along this vast expanse, starting around 1,000 B.C. and continuing for millennia. For much of this time, most Silk Road traders coming from western Eurasia were Muslim, and they brought their beliefs and rich culture to millions of people.

A Crossroads of Ideas

While the Silk Road was a two-way route, most of its movement was eastward, carrying Buddhism, Zoroastrianism, Judaism, and later, Islam.

By the 8th century, Muslims stopped thinking of religion geographically and began seeking converts along the Silk Road. The benefits of conversion to such a widespread religion were many, as Muslims preferred trading with other Muslims.

Cultural Exchange Along the Route

The ground floor cases in Hillman Library feature a map of the Silk Road from its Eastern terminus in the Chinese city of Xian to its western terminus in Constantinople. They also display the late-14th century Catalan Atlas, the most detailed world map of its time, showing key places along and major figures who traveled the overland route of the Silk Road. The exhibit continues on the second floor of Hillman Library in five thematic display cases:

*Horses and Dynasties: Cartography and Painting in China, 10th-14th Centuries,
*Alexander the Great, Kublai Khan, and Marco Polo: Confluences of Power and Exchange in Assia,
*Musical Encounters in the Deserts and Mountains of Central Asia,
*Explorations in Turkestan: Aurel Stein and Bamiyan, and
*New World Exploitation and the China Trade with Europe.