China's Rising Influence in Latin America and the Caribbean 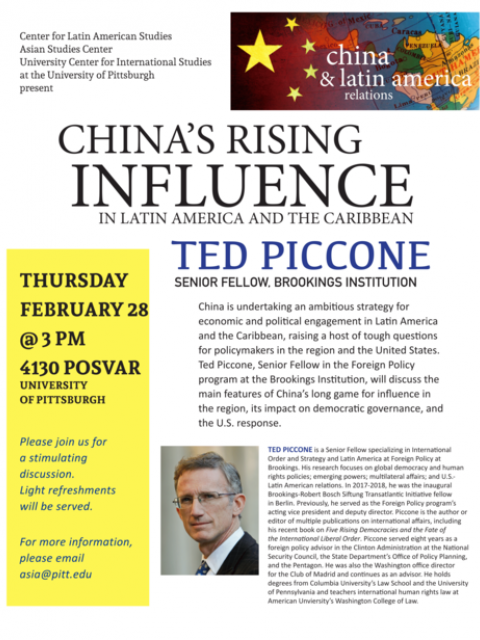 China is undertaking an ambitious strategy for economic and political engagement in Latin America and the Caribbean, raising a host of tough questions for policymakers in the region and the United States. Ted Piccone, Senior Fellow in the Foreign Policy program at the Brookings Institution, will discuss the main features of China’s long game for influence in the region, its impact on democratic governance, and the U.S. response.

TED PICCONE is a Senior Fellow specializing in International Order and Strategy and Latin America at Foreign Policy at Brookings. His research focuses on global democracy and human rights policies; emerging powers; multilateral affairs; and U.S.- Latin American relations. In 2017-2018, he was the inaugural Brookings-Robert Bosch Siftung Transatlantic Initiative fellow in Berlin. Previously, he served as the Foreign Policy program’s acting vice president and deputy director. Piccone is the author or editor of multiple publications on international affairs, including his recent book on Five Rising Democracies and the Fate of the International Liberal Order. Piccone served eight years as a foreign policy advisor in the Clinton Administration at the National Security Council, the State Department’s Office of Policy Planning, and the Pentagon. He was also the Washington office director for the Club of Madrid and continues as an advisor. He holds degrees from Columbia University’s Law School and the University of Pennsylvania and teachers international human rights law at American Unviersity’s Washington College of Law.

Please join us for a stimulating discussion. Light refreshments will be served.