The Pitești Experiment
Screening and Discussion with Director Victoria Baltag 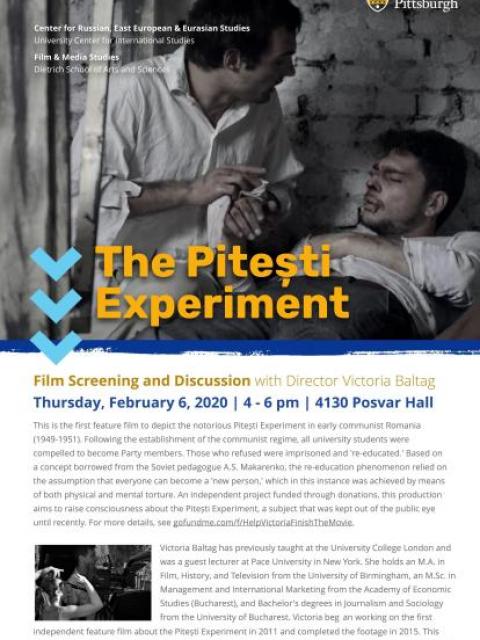 This is the first feature film to depict the notorious Pitești Experiment in early communist Romania (1949-1951). Following the establishment of the communist regime, all university students were compelled to become Party members. Those who refused were imprisoned and 're-educated.' Based on a concept borrowed from the Soviet pedagogue A.S. Makarenko, the re-education phenomenon relied on the assumption that everyone can become a 'new person,' which in this instance was achieved by means of both physical and mental torture. An independent project funded through donations, this production aims to raise awareness about the Pitești Experiment, a subject that was kept out of the public eye until recently. For more details, see gofundme.com/f/HelpVictoriaFinishTheMovie.

Victoria Baltag has previously taught at the University College London and was a guest lecturer at Pace University in New York. She holds an M.A. in Film, History, and Television from the University of Birmingham, an M.Sc. in Management and International Marketing from the Academy of Economic Studies (Bucharest), and Bachelor 's degrees in Journalism and Sociology from the University of Bucharest. Victoria began working on the first independent feature film about the Pitești Experiment in 2011 and completed the footage in 2015. This past year, she was entirely focused on her work as a film maker. Inspired by historical events, her film is in the post-production phase and is scheduled for completion in May 2020.