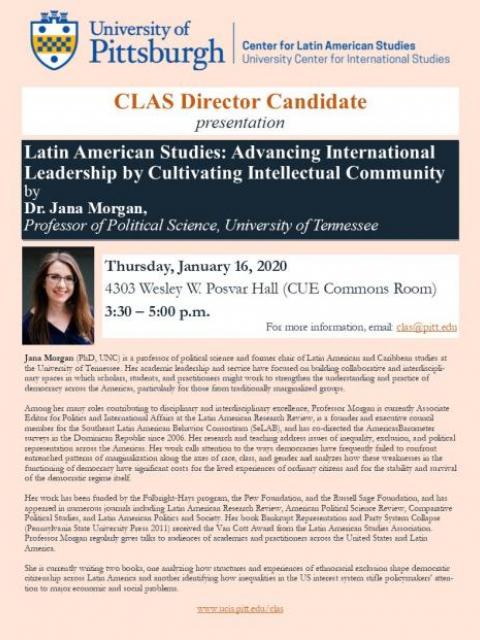 Jana Morgan (PhD, UNC) is a professor of political science and former chair of Latin American and Caribbean studies at the University of Tennessee. Her academic leadership and service have focused on building collaborative and interdisciplinary spaces in which scholars, students, and practitioners might work to strengthen the understanding and practice of democracy across the Americas, particularly for those from traditionally marginalized groups.

Among her many roles contributing to disciplinary and interdisciplinary excellence, Professor Morgan is currently Associate Editor for Politics and International Affairs at the Latin American Research Review, is a founder and executive council member for the Southeast Latin American Behavior Consortium (SeLAB), and has co-directed the AmericasBarometer surveys in the Dominican Republic since 2006. Her research and teaching address issues of inequality, exclusion, and political representation across the Americas. Her work calls attention to the ways democracies have frequently failed to confront entrenched patterns of marginalization along the axes of race, class, and gender and analyzes how these weaknesses in the functioning of democracy have significant costs for the lived experiences of ordinary citizens and for the stability and survival of the democratic regime itself.

She is currently writing two books, one analyzing how structures and experiences of ethnoracial exclusion shape democratic citizenship across Latin America and another identifying how inequalities in the US interest system stifle policymakers' attention to major economic and social problems.