Race, Gender and Representation in the Africana World 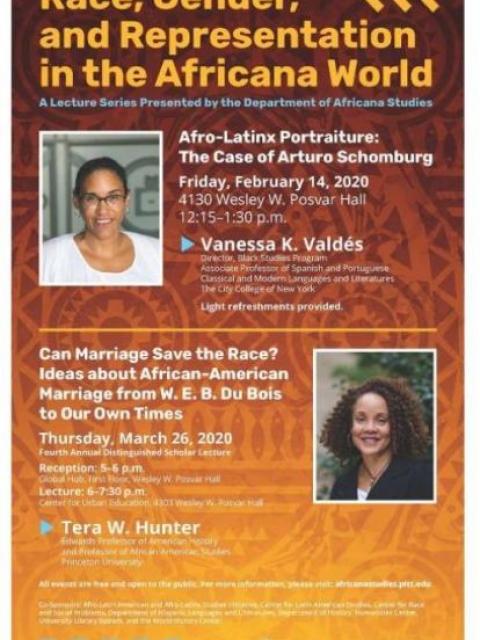 fro-Latinx Portraiture: The Case of Arturo Schomburg
The Race, Gender, and Representation in the Africana World series presents: Dr. Vanessa Valdés, Director of the Black Studies Program and Associate Professor of Spanish and Portuguese at The City College of New York-CUNY. Her research specialization focuses on comparative studies of Black cultural productions throughout the Americas, including the Caribbean, Brazil, and the U.S. She is the author of the critically acclaimed Diasporic Blackness: The Life and Times of Arturo Alfonso Schomburg (2017), in which she analyzed Schomburg’s engagement with the vibrant, ethnically diverse, and racially charged world of early twentieth-century New York City.

Summary:
Arturo Schomburg was a central figure in early 20th-century efforts to recover evidence of global Black excellence; with a focus on Spanish-speaking Black populations, he found himself educating a predominantly English-speaking audience about the histories of Afro-Latin Americans. Yet while he was prominent in New York City, particularly in the 1920 and 1930s, there was little memory of his physical image in the years after his death. In this talk, I will discuss questions of the genealogy of photography of Black populations in the ​early 20th century, Schomburg's legibility as a Black man in his portraits, and his measured resistance to the medium.

In addition to her public talk, Dr. Valdés will also speak with students enrolled in a class on Afro-Hispanic writers in the Department of Hispanic Languages and Literatures.