Steppe Irrigation: Water, Rivers, and Canalization in the USSR 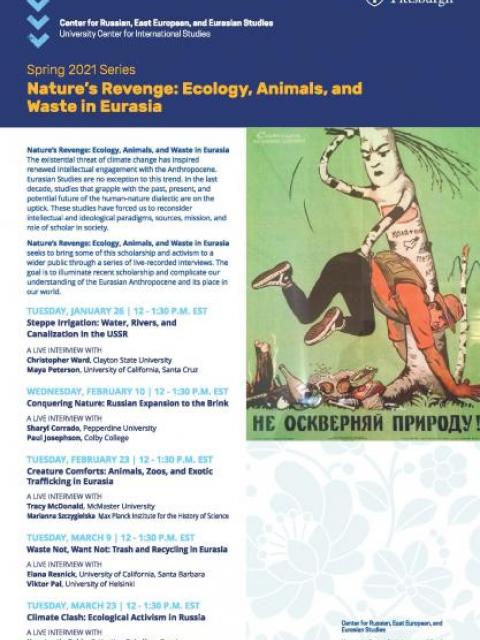 The desiccation of the Aral Sea is one of the greatest environmental catastrophes of the late twentieth century. But efforts to harness and divert the Aral’s freshwater are rooted in efforts to use technology to terraform landscape in the modern era. Using water to irrigate a wasteland was a hallmark of modernity, progress, productivity, and prosperity. Water was also emblematic of the colonial infrastructure of Russia and the Soviet Union. This live interview with Maya Peterson (University of California, Santa Cruz) and Christopher Ward (Clayton State University) will discuss the role of water in its winder environmental history of the Soviet project.

The existential threat of climate change has inspired renewed intellectual engagement with the Anthropocene. Eurasian Studies are no exception to this trend. In the last decade, studies that grapple with the past, present, and potential future of the human-nature dialectic are on the uptick. These studies have forced us to reconsider intellectual and ideological paradigms, sources, mission, and role of scholar in society.

Nature’s Revenge: Ecology, Animals, and Waste in Eurasia seeks to bring some of this scholarship and activism to a wider public through a series of live-recorded interviews. The goal is to illuminate recent scholarship and complicate our understanding of the Eurasian Anthropocene and its place in our world.