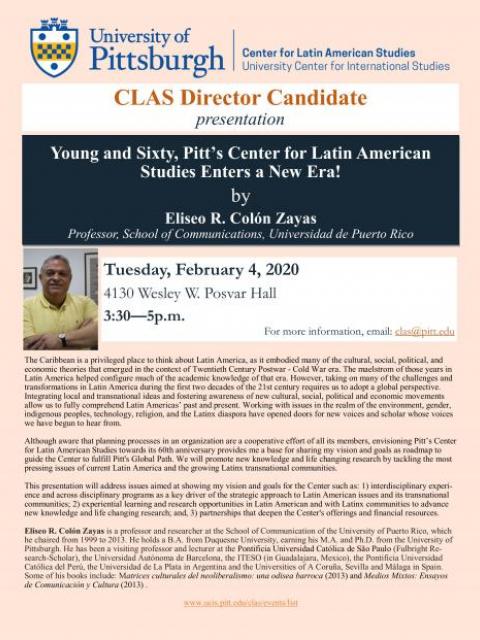 The Caribbean is a privileged place to think about Latin America, as it embodied many of the cultural, social, political, and economic theories that emerged in the context of Twentieth Century Postwar - Cold War era. The maelstrom of those years in Latin America helped configure much of the academic knowledge of that era. However, taking on many of the challenges and transformations in Latin America during the first two decades of the 21st century requires us to adopt a global perspective. Integrating local and transnational ideas and fostering awareness of new cultural, social, political and economic movements allow us to fully comprehend Latin Americas’ past and present. Working with issues in the realm of the environment, gender, indigenous peoples, technology, religion, and the Latinx diaspora have opened doors for new voices and scholar whose voices we have begun to hear from.

Although aware that planning processes in an organization are a cooperative effort of all its members, envisioning Pitt’s Center for Latin American Studies towards its 60th anniversary provides me a base for sharing my vision and goals as roadmap to guide the Center to fulfill Pitt's Global Path. We will promote new knowledge and life changing research by tackling the most pressing issues of current Latin America and the growing Latinx transnational communities.

This presentation will address issues aimed at showing my vision and goals for the Center such as: 1) interdisciplinary experience and across disciplinary programs as a key driver of the strategic approach to Latin American issues and its transnational communities; 2) experiential learning and research opportunities in Latin American and with Latinx communities to advance new knowledge and life changing research; and, 3) partnerships that deepen the Center's offerings and financial resources.