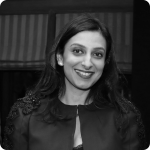 Ms. Thani graduated summa cum laude and received her BA in English and Creative writing in 2001 while studying for three years at Pitt Bradford and one at Pitt Oakland. She received numerous awards during her time at both campuses such as the Robert C. Laing Award for Creative Writing at UPB (2000), the Brackenridge Fellowship, University Honors College (2000) and the Alpha Lambda Delta Senior Award (2000). In 2001, she won a research grant to assist Dr. Fred Clothey, Department of Religious Studies, on an assignment in Hyderabad. She studied the role of women in the Hindu-Muslim tension that occurred during a local folk festival in Bonalu. Her career has encompassed stints at publications such as SEVENTEEN & L’OFFICIEL, TIME OUT MUMBAI and VOGUE. She is now the Editor-in-Chief of CONDÉ NAST TRAVELLER, India. She is the youngest editor of a CNT magazine in the world. Her contributions to the international community, through professional achievement and societal impact made her an ideal candidate to receive the inaugural Sheth International Young Alumni Achievement Award.