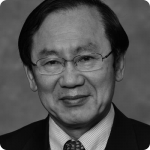 University of Pittsburgh engineering professor, Dr. Minking Chyu, received the Sheth Distinguished Faculty Award for International Achievement, and Ms. Asha Williams (GSPIA, 2007), a social protection consultant at the World Bank in Washington, D.C., received the Sheth International Young Alumni Achievement award. The Sheth International Achievement awards reception was held on March 18, 2015 at the William Pitt Union. Professor Minking Chyu Honored with Sheth Distinguished Faculty Award for International Achievement As a current University of Pittsburgh faculty member, Professor Chyu was recognized for his contributions to furthering international education. Chyu is the inaugural dean of the Sichuan University – Pittsburgh Institute, a joint engineering partnership between the two schools that opened its door to the first class of students in September 2015. Chyu was a key member of the University’s international development team that grew the collaborative vision from a student exchange into a $40-million, purpose-built undergraduate engineering institute and academic program in the western Chinese city of Chengdu. “Minking Chyu is the consummate global engineering educator,” says Dr. Jagdish Sheth, University of Pittsburgh alumnus (BUS ’62, ’66) who, with his wife Madhuri, promotes global thinking and international endeavors through the Sheth Family Foundation. “In a career spanning 30 years, he has shown a deep desire to equip students with the engineering and global skills needed for success anywhere in the world. He will bring those same talents to the first cohort of students at the Sichuan University-Pittsburgh Institute.” A faculty member of the Swanson School of Engineering since 2000, Chyu is also the associate dean for international initiatives and the Leighton Orr Endowed Chair Professor. Asha Williams is recognized with the Sheth International Young Alumni Achievement award for her social protection and social development work, primarily in the eastern Caribbean’s small island states. During the last eight years, her work and research has focused on social protection, social guarantees, active labor market interventions and monitoring, and education and poverty policies and assessments. “Asha Williams is a young professional who has used her Pitt education to make the world a better place,” says Jagdish N. Sheth. “She was a star while a student at Pitt and she has shown herself to be a star in her work at the World Bank and OAS. Asha is a shining example of how Pitt alums contribute back to society.” Wiliams graduated from the University of Pittsburgh in 2007 with a Master of International Development from the Graduate School of Public and International Affairs, and with a Graduate Certificate in Latin American Studies from the Center for Latin American Studies. She holds a BSc in Government from the University of the West Indies’ Department of Behavioral Sciences, in Trinidad and Tobago.