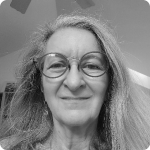 Nicole Constable is a groundbreaking scholar whose work focuses on the plight of domestic workers in Asia. She has authored four books about the lives and challenges faced by domestic workers, overwhelmingly female, and how these workers have struggled for greater rights.

Hong Kong’s foreign domestic workers, or "helpers", are a multi-million-dollar business. Approximately 400,000 women, hailing primarily from the Philippines and Indonesia, travel to Hong Kong to work as care givers and household workers. Agencies train, import, and trade in them; employers rely on them, but also violate their contracts or discard helpers and exchange them for new ones when they become unhappy with them, view their current employee as "worn out," or the worker becomes pregnant. Moreover, state policies and consulates do not always effectively protect foreign domestic workers as illustrated in Dr. Constable's groundbreaking research.

Dr. Constable’s first book, Maid to Order in Hong Kong: Stories of Filipina Workers, was published in 1997 and documented the economic and legal plights of these workers for the first time. Since they are women, living in close contact with their employers, many aspects of their lives, including how they act and speak and what they eat and wear, are controlled. Additionally, they may be sexually exploited and the children they care for may either adore them or pick on them. Maid to Order was a ground-breaking book that opened the eyes of many living inside and outside Hong Kong to the plight of domestic workers.

By the time of her 2014 book, Born Out of Place: Migrant Mothers and the Politics of International Labor, Dr. Constable's work had helped fuel a growing recognition of the plight of domestic workers. Working closely with the NGO Pathfinders Hong Kong, she co-organized a series of book release lectures aimed at the organization’s biggest donors and other groups and leaders within Hong Kong society. Born Out of Place helped to publicize the issue of domestic worker policies, supported these workers in their most vulnerable time as mothers, and promoted changes in policies and support for domestic workers who become pregnant.

Dr. Constable's newest 2022 book, Passport Entanglements: Protection, Care, and Precarious Migration, continues her focus on the plight of domestic workers and analyzes the ways in which the governments of Indonesia and the Philippines provide support or ignore their domestic workers in Hong Kong and other parts of Asia.

In addition to her own research, Dr. Constable has worked to support other young scholars who study this topic. She has been generous in her time as a member of the Social Science Research Council's Faculty Mentor Dissertation Workshop on Transnational Asia, Korean Studies Workshop for Junior Faculty, and Inter-Asian Connections Workshop. These workshops are designed to support young scholars as they navigate the complexities of conducting research and writing about the plight of domestic workers and other inter-Asian issues.