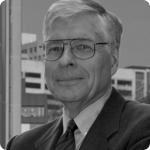 Professor Brand has dedicated himself to creating international programs and fostering cross-border cooperation and understanding during his 37 years as a faculty member at Pitt Law. In 1995, Brand became the founding director of Pitt Law’s Center for International Legal Education (CILE), a position that he has continued since that time, now holding the title of Academic Director. Under his leadership, CILE has played a major role in teaching, scholarship, and service to the global legal community. Brand directs the LL.M. Program for Foreign Law Graduates and the S.J.D. Program at the School of Law; he has educated students from more than 70 countries.

Professor Brand has been a Fulbright Scholar at the Universiteit Brussel, a Research Scholar at the Institute for Advanced Studies at the University of Bologna, and a visiting professor at the University of Augsburg and the University of Ghent. He has lectured on international trade and business law matters at universities in the U.S. and abroad. His excellence in the classroom has earned Professor Brand both the Chancellor's Distinguished Teaching Award, a University-wide honor, and the Law School's Excellence-in-Teaching Award. He has also received the Chancellor's Distinguished Public Service Award. Professor Brand represented the United States at Special Commissions and the Diplomatic Conference of the Hague Conference on Private International Law that produced the 2005 Convention on Choice of Court Agreements. For over a decade, he has worked with the U.S. Department of Commerce to develop Middle East law school curricula in international commercial law and arbitration, training students and faculty from schools throughout the Middle East and North Africa. Brand’s many recognitions include: