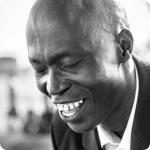 In the two short years after he graduated from the University of Pittsburgh School of Education in 2012, Silver Francis Oonyu managed to procure funding, develop proposals, and break ground on the Silver Memorial Inclusive Learning Center, or SMILE School in Uganda. Today, the school, which is the first inclusive school in the Teso region, has over 200 students enrolled. The University of Pittsburgh awarded Oonyu the 2019 Sheth International Young Alumni Achievement Award in recognition of his contributions to the cultivation of inclusivity and understanding at Pitt and in his home country.

Francis Silver Oonyu lost his sight to measles at four years old. Because his parents lacked a formal education, Oonyu did not receive special education services at school and was mistreated by his teachers, peers, and the community. He found refuge as a teenager after the fall of Idi Amin’s regime in 1979 when he discovered St. Francis Primary School for the Blind. It was here that his dream to open an inclusive school for children with disabilities in his native country, Ugandawas born. This work was supported by his professional training at the University of Pittsburgh, where Oonyu earned a master’s degree in special education and a graduate certificate in African Studies. The relationships he established at Pitt would be instrumental in achieving his dream of opening the Silver Memorial Inclusive Community Learning Center (SMILE). After graduating from Pitt in 2012, Oonyu moved back to Uganda, where he taught part-time at St. Francis, the same school that had supported him as a child. At the same time, Oonyu met with friends, churches, and other organizations to secure funding for his own school. For two years, he oversaw a series of efforts to raise funding in cooperation with the Pittsburgh-based organization Vulnerable Children and Youth Action (VCAYA). In 2014, the Advocacy for Vulnerable Children’s Rights (AVCR), Project to End Human Trafficking (PEHT), and members of the VCAYA team, in collaboration with members of the Opucet community where Oonyu was born, held a ceremony and broke ground for SMILE School.

Currently, over 200 students are enrolled in the SMILE School, regardless of ability status. Oonyu serves as the founder and an administrator and also works as an educational consultant for special education, an assistant lecturer, and program manager for Advocacy for Vulnerable Children’s Rights Uganda. Oonyu’s many recognitions include: