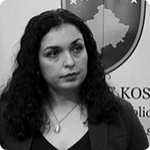 Pitt School of Law alumna Vjosa Osmani achieved success at a young age and did so while working in the traditionally men’s world of politics in the Republic of Kosovo. Since graduating two years ago with a SJD in Law, Dr. Osmani has become a respected voice in Kosovo’s political circles as well as in international organizations. She has the distinction of receiving more votes than any other women in the history of parliamentary elections in Kosovo and she was the second-most voted for official in her party, the Democratic League of Kosovo. In recognition of her academic and professional accomplishments in the establishment and consolidation of democracy and human rights in her homeland, Vjosa Osmani is to be awarded the 2016-2017 Sheth International Young Alumni Achievement Award. Dr. Osmani will receive her award at a reception at the University of Pittsburgh on Wednesday, April 5, 2017. A native of Prishtina in Kosovo, Dr. Osmani served in roles as Chief of Staff, Foreign Policy Advisor, and Legal Counsel to the President of the Republic of Kosovo from 2006 to 2010. During this period, she was the President’s representative on the Constitutional Commission, the body that drafted the first Constitution of the Republic of Kosovo. She was also a member of the legal team at the International Court of Justice in the advisory proceedings related to Kosovo’s Declaration of Independence. In 2011, Dr. Osmani was elected to the national parliament of the Republic of Kosovo and is now completing her second term in office. As a member of parliament, she has served as Chair of the Committee for European Integration and Vice Chair of the Committee for Constitutional Reforms in Kosovo. The European Parliament has adopted a Resolution recognizing and welcoming the initiatives developed by Dr. Osmani to foster cross-party dialog. In addition, the United Nations Development Program named her the 2011 Social Inclusion Champion for her role advocating for social inclusion and welfare in Kosovo. Dr. Osmani holds a Bachelor’s degree from the University of Prishtina, and Masters and Doctorate degrees from the University of Pittsburgh School of Law.