Exploring Eastern Europe in a Weekend with REEES 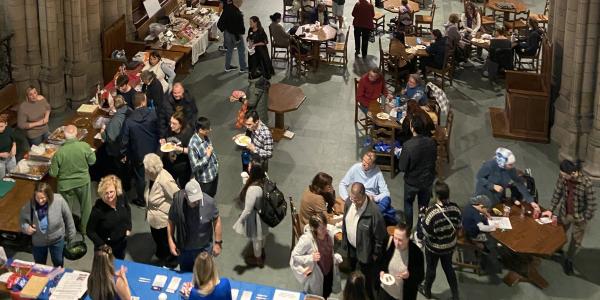 For a region as complex as Eastern Europe, it can be challenging to share a condensed concept of heritage in a single weekend. However, during International Education Week 2022, the Center for Russian, East European, and Eurasian Studies (REEES) did just that, bringing together Pittsburgh’s Eastern European community for a discussion and celebration that will extend throughout the year.

First, on October 15, Dr. Sofia Dyak, Director of the Lviv Center for Urban History, virtually joined REEES, sponsors, and guests to share her perspective as a public historian displaced during the war in Ukraine.

Dr. Dyak led the crowd in a discussion of heritage and community memory in the context of the war. As Ukraine’s built environment is annihilated by Russian forces, Ukrainians have become the guardians and stewards of their history; they must decide which artifacts, from family photos to national relics, are protected in order to become part of the next generation’s heritage. As for Dr. Dyak, she remains outside of Ukraine for the time being, a historian watching the creation and curation of history and waiting to return home.

The following day, in partnership with the Nationality Rooms & International Exchange Program (NRIEP), REEES transitioned to celebrate the annual Eastern European festival in the Cathedral of Learning, an example of cultural curation in action. Countries across Eastern Europe were represented with art, cuisine, traditional dress, and opportunities to study abroad with NRIEP and REEES. Eager guests and those who just happened to stroll through the Cathedral were invited to step into the atrium with music from the Gypsy Stringz and regional pastries for taste testing. Nut rolls and chimney cakes in hand, they strolled around, browsed wares from local Eastern European merchants, and had the opportunity to paint a pysanky egg or watch puppets in action. All Eastern European heritage rooms were also open to the public, a special treat supported by room committees and Quo Vadis.

Towards the end of the day, attendees were given a gift of music from the Czech Republic, Armenia, and Hungary by Dr. Katie Manukyan, who is both Executive Director of the Slavic, East European, and Near Eastern Summer Language Institute and a trained opera singer. Dr. Manukyan shared not only songs, but their background and stories.

“The Crane” by Komitas, a hymn to diaspora communities of the Armenian genocide, was especially reminiscent of Dr. Dyak’s discussion the day before. The song focuses on refugees asking a crane for news of their homeland, keeping their heritage and history alive through stories.

Zita Toth-Shawgo, REEES Engagement Coordinator, said, “I think I can speak on behalf of all the organizers when I say that this celebration of our heritage and cultures in Eastern Europe manifested not only on the outside, in our traditional costumes and dresses, the beautiful arts and crafts, and delicious treats displayed on the tables or in the rooms, but also in our hearts, rejoicing in this long-awaited, in-person reunion and festivity of our local East European communities."