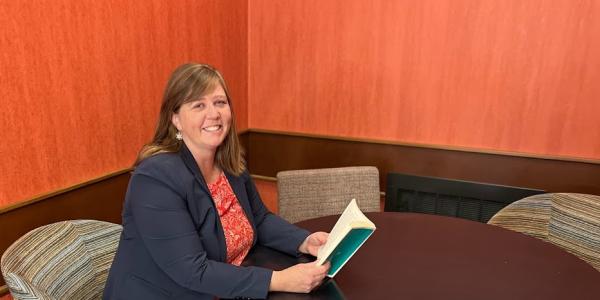 Allyson Delnore is a familiar face around the office at UCIS. Currently, she serves as the Executive Director of Academic Affairs for UCIS and holds an adjunct appointment with the Department of History; however, there’s a lot more to Allyson.

Maggie McDonald: What brought you to Pitt? How did you end up in your current role?

Allyson Delnore: I relocated to Pittsburgh with my family at the end of 2010 from Alabama. I had been a faculty member at Mississippi State University teaching French and European history, but my husband got a job opportunity in this city that we were really excited about and we couldn’t pass it up. After some deep reflection, I realized that I was interested in exploring university administration, rather than looking only for other faculty positions. So, when a position opened up at the University of Pittsburgh in the European Studies Center, I stayed up all night writing and revising my application to submit it immediately. I probably should have slept on it some to make sure it wasn’t riddled with errors, but I guess it was good enough. I got the job.

I spent ten and a half years in that position as Associate Director of the Center – I had found my dream job, in many ways. When the opportunity came up to take this new position as Executive Director of Academic Affairs for the University Center of International Studies, it was hard to leave the Center and the work I had been doing for over a decade there. But, luckily, I didn’t go far and I still get to work not only with the ESC, but now with all of the UCIS centers.

MM: What does a typical day in the office look like for you?

AD: Well, it definitely looks a lot different than it did before the pandemic. I work from home 1-2 days a week on average, which has created some nice balance. Most of the time, though, I’m on campus. I get here early – by 7:30 most of the time, because I need to drop my oldest off at high school and the start time there is ridiculously early. But that means I have at least 60 minutes of uninterrupted time to triage my email, check my calendar, and get settled in for the day. And then it is off to the races.

Some days are all meetings – usually virtual, but some in person – back-to-back. Those are the hardest, because you end up generating new tasks on your to do list, without actually checking off any existing tasks. Some days start out with very few meetings, but the day quickly fills up as last-minute requests and calls come in. Most of the time, I am working on whatever task has the most imminent deadline. But I do try to include time throughout the work week to move forward longer-term projects. The best days are the ones where I meet with faculty members, students, and/or colleagues in the Centers and we are building new courses or programs that will really help students to better meet their academic and career goals. I really love building programming.

MM: The accomplishment at Pitt that you’re proudest of?

AD: There are a few. I guess that is how you know you have a rewarding career. The one that comes to mind first, I suppose, is the role I played in helping to co-organize with the European Commission an event in Brussels celebrating the 20th Anniversary of the EU Centers of Excellence program, which allowed us to highlight the fact that Pitt was one of the first centers in the world to be designated a Center of Excellence for EU Studies and one of only three in the United States to hold that designation continuously since the program began in 1998.

We invited EU officials and former ambassadors to attend and to speak, and it was held in the House of European History in Brussels. It was a lot of fun. And it led to my being the only representative from an American center to be invited to speak by the Commission at an event marking the 30th Anniversary of the Erasmus + Programme (under which the Centers of Excellence program now resides) at an event the following summer. Pitt has such a big reputation when it comes to EU Studies, and I was honored to be able to represent the University in this way.

AD: For the first time in Pitt’s history, we have six centers that received the federal grants that allow us to award prestigious Foreign Language and Area Studies (FLAS) Fellowships and that designate our area and global studies centers as National Resource Centers. Pitt competes for these funds with universities like Harvard, Stanford, Georgetown, UNC, Wisconsin, and Michigan. This makes Pitt one of the best places in the country to study Africa, Latin America, Europe, Eurasia, Asia, and globalization.

Now in my new role, I get to work with all six of those centers to coordinate the administration of those FLAS awards (which will benefit over 80 Pitt students over the next four years) and to put in place the programming that the grant funding allows. I also get to work with UCIS’s newest center, the Center for Ethnic Studies Research, as they build programming to enhance teaching and research on race, ethnicity, and identity at the University. All of this will mean more opportunities for Pitt students to deepen their understanding of the world around them, both domestically and internationally; learn world languages, including the less and least commonly taught languages that Pitt offers; gain pre-professional advising; and prepare for the kinds of futures that are best suited to our deeply-engaged, well-informed, socially-conscious, and globally-minded graduates.

MM: One fun fact that people might not know about you?

AD: I was an extra in the movie Dumb and Dumber. I know, I know. The jokes write themselves. Plus, that means that I’m really old. Yikes!

AD: There is always an opportunity to learn. I work with fantastic and energetic colleagues, many of them from different parts of the world, all with different areas of expertise. So I learn every day from my co-workers. But also, UCIS units organize or co-sponsor hundreds of events each year.  I couldn’t possibly attend them all and get any work done, but I do try and attend as many as I can. There is always something interesting going on in the Global Hub or on the fourth floor of Posvar Hall!