The Bridge to Nowhere and the Central Memorial at Žepa, An Island in a Bosnian Archipelago 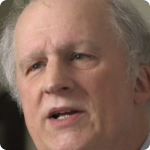 This talk discusses the foreign support for the symbol of an Ottoman-era bridge in the tiny Bosnian village of Žepa, which the US Embassy in Sarajevo paid $62,000 to reinforce in 2016. The bridge is not of much importance to the local population. There is a memorial in the village of Žepa, which was widely considered one of the "safe spaces" for Bosniaks that the Bosnian Serb Army took in July of 1995, as no massacre occurred there. Ignoring the memorial that is important to them, as emblematic of foreign involvement in Bosnia during and since the 1992-1995 war.

Robert Hayden (J.D., Ph.D.) is former director of REEES (then REES) and an anthropologist of law and politics. His primary research for more than three decades has focused on the Balkans, but has also done fieldwork in India (1970s, 1992, 2013) and among the Seneca Iroquois of New York State (1970s). Following ethnographic research on Yugoslav socialism from 1981-89, he did extensive work on issues of violence, nationalism, constitutionalism and state reconstruction in the formerly Yugoslav space, as well as on transitional justice issues stemming from the Yugoslav wars. From 2007-2013 Professor Hayden headed Antagonistic Tolerance: An International & Interdisciplinary Project on Competitive Sharing of Religious Sites, which developed and analyzed, variously, ethnographic, historical and archaeological data from Bosnia, Bulgaria, India, Mexico, Peru, Portugal and Turkey. His new research stemming from this project include studies of sufi/ dervish orders in post-imperial settings, and the (re)construction of religious sites to mark competing national territorial claims in Bosnia since the end of the war there.