Vincent Who? Screening and producer Q and A. 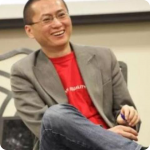 In 1982, a Chinese American named Vincent Chin was murdered in Detroit by two white autoworkers at the height of anti-Japanese sentiments arising from massive layoffs in the auto industry. They were given a $3000 fine and 3 years probation for the murder, but no time in prison. Outraged by this injustice, Asian Americans across the nation united to form a pan-Asian identity and civil rights movement. The film Vincent Who? explores this legacy within the larger narrative of Asian American History.
In partnership with the Pittsburgh Chapter of the Organization of Chinese Americans, we will be screening the film followed by a discussion with the producer Curtis Chin. The hybrid event will be held on the Pitt campus on Monday September 27 at 7:00 pm EDT with the option for joining us online as well. To register click here