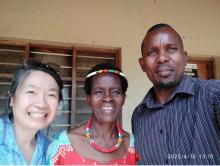 “When girls are educated, the countries become stronger and more prosperous.”  Michelle Obama

Senior Chief Theresa Kachindamoto of the Dedza district in the central region of Malawi has been featured by many international news organizations and NGOs.  She is known as the Terminator of child marriages. Malawi has one of the highest rates of child marriage in the world, with approximately 42% of girls married before the age of 18 and 9% below the age of 15 (UNICEF, 2019). Tradition, gender inequality, lack of education and poverty perpetuate child marriage.  Chief Kachindamoto was given the gift of education by her father although as a young girl she resented being told that she had to go to school when this was not imposed on her 11 siblings.  She attended Chancellor college and worked as a secretary for several years until 2003 when the chiefs of Dedza District chose her as the next senior chief, an honor bestowed on only a small number of Malawian women.

She remembered seeing young girls, 12 or 13 with babies on their backs.  Initially she thought that the babies were their siblings.  Even though Malawians in the village say this is our culture, she could not accept it.  She could not believe what was happening.  She gathered other chiefs, village seniors, pastors, school headmasters, policeman.  She persuaded them that everyone had a role to play and that they could change the problem of child marriage. She said that the girls needed to go back to school and she convinced their parents to care for the grandchildren while the girls attended school.  She has a network of “secret mothers” who would inform her of young girls who were married in the villages and serve as their mentors.  Senior Chief Kachindamoto is known to fire some chiefs who refused to condemn this practice.  In 2017 the Malawi government formalized legislation to make marriage under age 18 illegal.  The practice went underground, and some girls are still forced into marriage by pregnancy.

This trip, encouraged by Dr. Martina Anto-Ocrah, I was determined to seek out our hero, Chief Kachindamoto in Nkatakata, Malawi.  I am curious to know how she was able to change culture and tradition. Chipi, a good friend with innumerable talents, served as my cultural guide.  It was a 3-hour drive to Nkatakata from Lilongwe with frequent stops to ask for direction once we are near.  Needless to say, her home is not on Google maps.  Chipi and I were captive by her gentle storytelling, wisdom and humor.  We painfully learned that during COVID-19 pandemic, with lock down, hunger and school closing, a few cases of child marriage did occur in her area but she and her mother network made sure that it would not happen again.  She would like to see the young women who completed secondary school get trained in technical work so that they could be self-employed and independent.  Many skilled jobs like tailoring, welding, carpentry, electronics repair, are not opened to women in rural Malawi.  She remains committed to see that young girls are educated and that more opportunities are open to young women so that they can pursue their hope and dream. Her dream is to have college scholarships and job-training centers to empower girls to fulfill their potential.

Even when child marriage is eradicated, it is only the beginning of the struggle for gender equity.  We departed with the understanding that much more work needs to be done.

In solidarity, Thuy Bui, Peace Corps volunteer in Malawi from 1995-97.