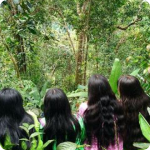 This film deals with the "Embera Chami" society, an Amerindian community, where machismo is very present. This film denounces in a way the excision undergone by these women, which he will folow on a daily basis, and in particular Luz, hidden, masked, whose only hands, feet and hair are shown, singing of the pain of their bodies and that of having had to leave her village, following her refusal to keep quiet about her genitals removal.

She sings about her physical and psychological pain. These traditional songs accompany us through the film, as a prayer, bringing hope to the women and allowing them to speak. The body is taboo here, and the term "ablation" here extends far beyond a "little thing."

The violence of this practice is treated ina poetic, gentle way, contrasting with the theme. This documentary gives the women the chance to express themselves, the director gives them a voice.