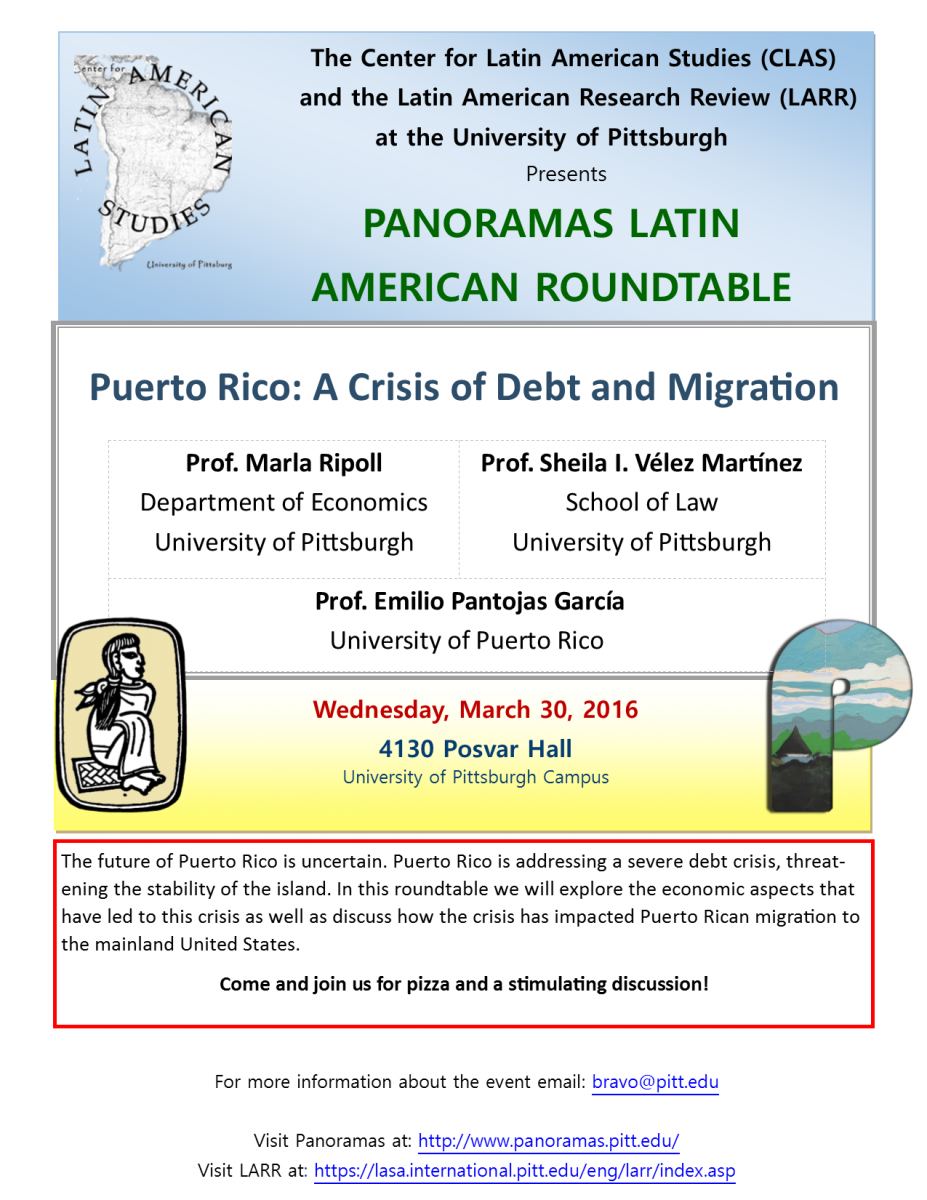 Puerto Rico: A Crisis of Debt and Migration

The future of Puerto Rico is uncertain. Puerto Rico is addressing a severe debt crisis, threatening the stability of the island. In this roundtable we will explore the economic aspects that have led to this crisis as well as discuss how the crisis has impacted Puerto Rican migration to the mainland United States. Theater and Performance in the Americas
Have you wondered about the intersection of theatre and Latin America?

Theatre and Performance are scholarly and artistic fields.  The theory and practice of
theatre and performance not only depend upon one another; they intersect with and
impinge upon pressing national and international issues surrounding representation,
opportunity and justice. 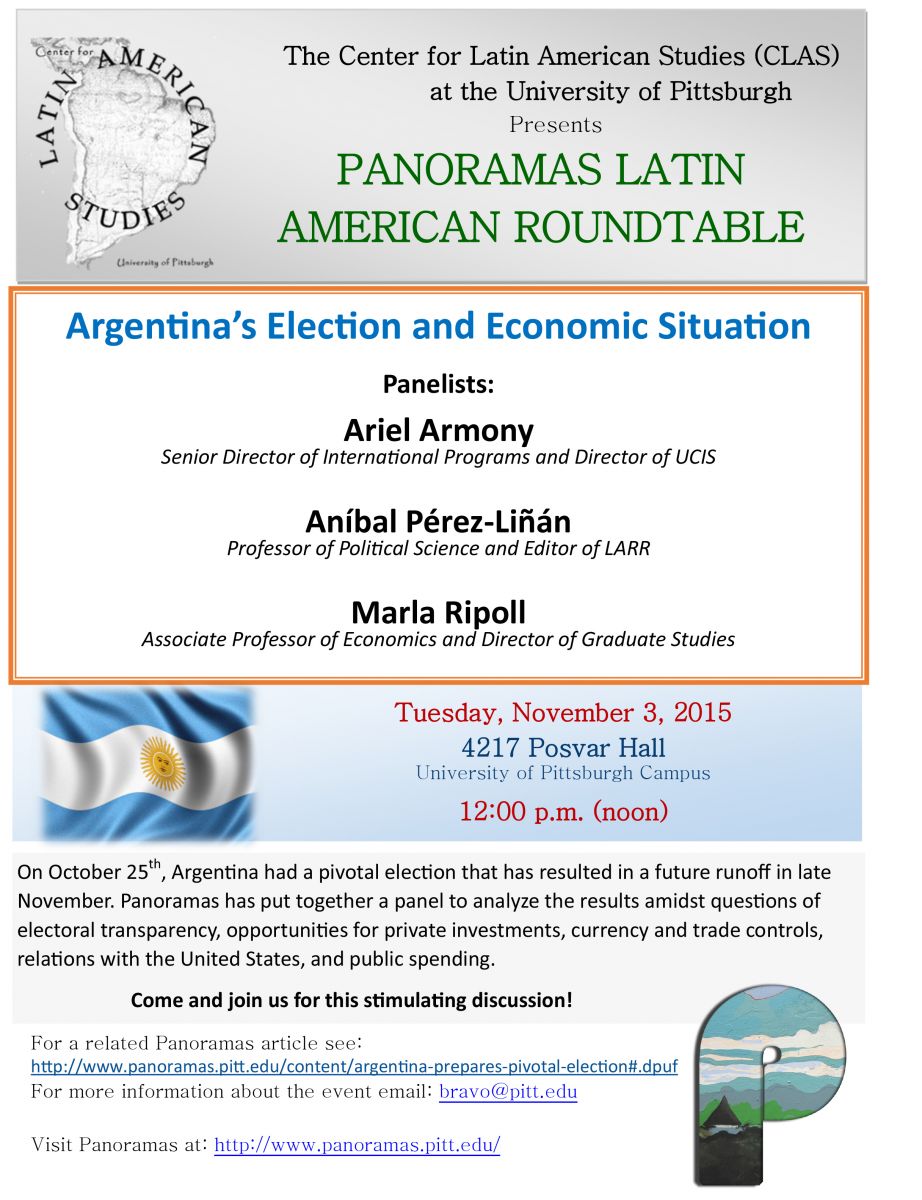 Aníbal Pérez-Liñán
Professor of Political Science and Editor of LARR

On October 25th, Argentina had a pivotal election that has resulted in a future runoff in late November. Panoramas has put together a panel to analyze the results amidst questions of
electoral transparency, opportunities for private investments, currency and trade controls,
relations with the United States, and public spending. by Mr. Ricardo Campusano
Lawyer and Human Rights Activist from the Dominican Republic

Mr. Campusano will explain how thousands of persons, mostly of Haitian descent, were made stateless (left without official citizenship in any country) when a 2004 immigration law and the 2010 Dominican constitution did away with birthright citizenship and a 2013 constitutional court ruling made that standard retroactive.

Mr. Campusano will describe the legal, social, and economic hardships that these stateless persons face, including the difficulties in obtaining birth and identification documents, and the threat of deportation.

Mr. Campusano will also discuss how international and local human rights organizations have responded to the the Dominican government's policies.

The Power Point-based lecture will be given in Spanish with English translation. The event is free and open to the public. 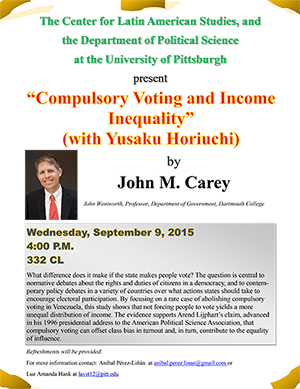 What difference does it make if the state makes people vote? The question is central to normative debates about the rights and duties of citizens in a democracy, and to contem-porary policy debates in a variety of countries over what actions states should take to encourage electoral participation. By focusing on a rare case of abolishing compulsory voting in Venezuela, this study shows that not forcing people to vote yields a more unequal distribution of income. The evidence supports Arend Lijphart’s claim, advanced in his 1996 presidential address to the American Political Science Association, that compulsory voting can offset class bias in turnout and, in turn, contribute to the equality of influence. Join us for an hour discussion on Sports in Latin America and the Caribbean involving topics such as:

A Professor of Sport History, Rob Ruck has written and made documentaries about sport in black America and Caribbean.

Please join us today for a different type of lunchtime event as part of our Panoramas Roundtables.  In our effort to promote general discussion about topics of broad interest, we will set up three tables for people to gather around and discuss one of the following topics: Latino (a) issues, the Chilean scandals, and the Argentine scandals.  Each table will have an expert to lead the discussion.  The discussion leaders, respectively, will be: Shelia Velez who leads Pitt’s Immigration Law Clinic, Panoramas editor and Ph.D. Candidate in political science, Ignacio Arana, and Aníbal Pérez-Liñán from Political Science.

And if the conversation isn’t enough to attract you, there will be pizza!

Please note the following articles of interest in Panoramas and elsewhere:

The Challenges and Hopes of Rebuilding Haiti's Healthcare
Marisol Wandiga (Global Links)
January 12, 2015 will mark 5 years since the massive earthquake hit Haiti. Join Global Links for a discussion on the challenges that still remain to help rebuild Haiti's Healthcare System and learn about extraordinary projects, some led by Pittsburghers that are changing the face of healthcare in Haiti.
4130 Posvar Hall
Tuesday, November 4, 2014

Sponsored by: The Center for Latin American (CLAS), and the Global Studies Center at
the University of Pittsburgh

Brazilian Election—Before
Participants from Pittsburgh and firsthand accounts from participants in Brazil.

Discussion on the elections with scholars from the University of Pittsburgh and La
Universidad de Costa Rica.

Alejandro shared his impressions and fieldwork experience in Venezuela during a critical moment of economic crisis, violence and social unrest. Format. Brief intro and Q&A.