Are you between the ages of 18 and 35 and interested in making films? 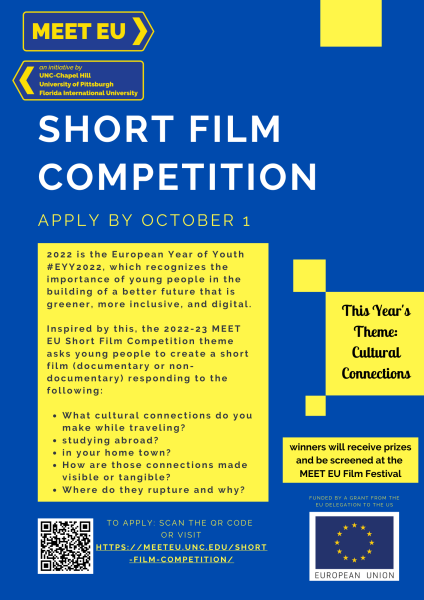 2022 is the European Year of Youth #EYY2022, which recognizes the importance of young people in the building of a better future that is greener, more inclusive, and digital.  Inspired by this, and funded by a Grant from the EU Delegation to the EU, this year's MEET EU Short Film Competition theme asks young people to create a short film (documentary or non-documentary) responding to the theme "Cultural Connections." The theme is intentionally broad and entrants are encouraged to be creative in how they interpret it.  But all entries must respond to the theme.

Who is eligible?  Anyone ages 18-35 who are resident of OR currently enrolled in a college or university in Pennsylvania, North Carolina, or Florida.  In addition, recent alumni (age 35 or under) of Florida International University, University of North Carolina-Chapel Hill, or the University of Pittsburgh (all campuses) are also eligible, regardless of residency.

Submissions should be no more than 10 minutes and entrants will be asked to explain how their short film respons to the theme.

The top submissions from each of the three states will be showcased on the MEET EU and partner institutions websites and available for public viewing at a virtual MEET EU Short Film Festival. A jury of film scholars and filmmakers will review all eligible entries to select the films that will be showcased and award a jury prize.  An audience prize will also be awarded.

(Prizes will not be awarded as cash.)

Inspired by the European Year of Rail, which shines a light on one of the most sustainable, innovative, and safest modes of transportation, and acknowledging the challenges we have all faced during the pandemic in traveling and forging new connections, the inaugural MEET EU Short Film Competition for U.S. Youth asks young people to create a short film (documentary or non-documentary) responding to the theme “Transatlantic Connections”. The theme is intentionally broad and entrants are encouraged to be creative in how they interpret it.

MEET EU: Making Encounters, Engaging Transatlanticists, is a grant generously funded by the European Union through the European Union Delegation to the US in Washington, DC. The goals of this grant are to shine a light on the EU and the importance of the transatlantic relationship through the eyes of young Americans. We encourage entrants to think creatively to give us your perspective on the European-American relationship, similarities and differences between countries, and why this relationship matters.

The top submissions from each of the three states will be screened at the 2022 Pittsburgh EU Film Festival, which will take place January 28-February 4, 2022. Festival audiences will help select the grand prize winners.