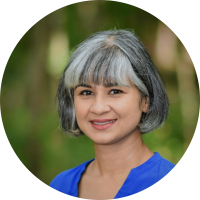 mrr55@pitt.edu
Web Site:
Personal Page
Mrinalini
Rajagopalan
Mrinalini Rajagopalan is a historian of India’s built environment and is particularly interested in the impact of colonialism and nationalism on the architecture and urbanism of modern South Asia. Her first monograph Building Histories: The Archival and Affective Lives of Five Monuments in Modern Delhi (University of Chicago Press, 2016) traced the modern lives of five medieval monuments in India’s capital city, Delhi, and brings attention to their contested histories, unexpected uses, and ideological appropriations by state and non-state actors. This book received the Alice Davis Hitchcock Award from the Society of Architectural Historians in 2018.
She is currently writing a book titled “Marks She Made: The Art and Architecture of Begum Samru, 1803–1836”. It focuses on the artistic and built works of Begum Samru—a wealthy dowager who rose from humble beginnings as a dancer to become the independent ruler of a prosperous territory in nineteenth-century North India. This book is currently under preparation and will be submitted for review in Spring 2022. She is also incubating a second more ambitious project, that investigates the various architectural products built, commissioned, and patronized by the Tata Corporation during India's long twentieth-century transformation from a European colony to a socialist nation and most recently to an eager participant in global neoliberal markets.
At Pitt, Rajagopalan offers courses on the built environment in Western contexts and the global south; global urbanisms in the nineteenth and twentieth centuries; the modern history of architectural preservation in metropolitan and colonial milieus; and the history and theory of contemporary architectural practice. As part of the department’s anti-racist initiatives she has also developed an undergraduate seminar called “Black Built America: Architectures of Black Resistance in the United States”, which will be offered for the first time in Spring 2022.
Before coming to Pitt, Rajagopalan held fellowships at Yale University, the Massachusetts Institute of Technology, New York University, and the Canadian Centre for Architecture. She holds a professional undergraduate degree in architecture and practiced for four years in Kuala Lumpur, Malaysia and Ahmedabad, India where she worked for noted architect and Pritzker laureate Balkrishna V. Doshi.
Rajagopalan welcomes queries from prospective PhD students interested in pursuing histories of the built environment as it intersects with questions of imperialism, nationalism, and gender, race, and other intersectional identities, in the global South.