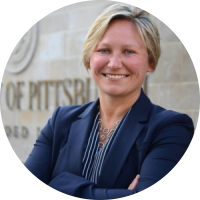 anh59@pitt.edu
Web Site:
Personal Page
Adriana
Helbig
"My first book, titled, Hip Hop Ukraine: Music, Race and African Migration (Indiana University Press, 2014) is the first ethnographically based analysis of hip-hop in Ukraine and stems from long-term research among Ukrainian and African musicians in Ukraine and Uganda. The book incorporates ethnomusicological and ethnographic analysis in the growing research on migrants in Ukraine, which receives the fourth-largest number of migrants after the United States, Canada, and the Russian Federation. It contributes to research on African diasporas and sheds light on experiences of African migrants and student populations in the former Soviet Union through an analysis of Cold War discourse on race in music performance. The book is also the first ethnographic account of African musicians in a postsocialist society. It examines how U.S. popular music is interpreted and appropriated in East Africa, the birthplace of the majority of African migrants living in Ukraine. This multi-sited ethnography draws connections with Ukrainian musicians’ appropriations of U.S. hip hop styles with the hip hop ideologies of musicians in countries such as Uganda. It speaks in particular to scholars of hip hop who increasingly analyze the genre’s influence beyond the U.S. It shows how numerous interpretations of U.S. hip hop (East African, postsocialist) engage with each other in other parts of the world.
I have continued to contribute to the growing conversation on global hip-hop by co-editing a volume titled Hip Hop at Europe’s Edge:Music, Agency and Social Change (Indiana University Press, 2017) with sociologist Milosz Miszczynski. The book features 16 chapters written by scholars in Eastern Europe on the role hip hop plays in social movements, politics, and identity negotiations. More than 20 years after socialist collapse, the former Eastern Bloc countries are as dissimilar as ever. There has been a war in the Balkans. Czechoslovakia has split into two countries—the Czech Republic and Slovakia. Poland, Hungary, Bulgaria, and Romania have entered the European Union. Russia has used military might against Georgia and Ukraine. Pre-socialist histories are shaping post-socialist narratives. The edited volume offers country-based analyses of hip hop histories in Eastern Europe and does so in relation to the complex historical, economic, social, and political realities that determined how hip hop has been appropriated, and where, why, and by whom it is deemed a source of agency and identity.
My current book project Romani Music and Development Aid in Post-Soviet Ukraine analyzes the impact of international development aid on two generations of rural and urban Romani musicians in Ukraine. Drawing on 15 years of ethnographic research among non-governmental organizations working with Romani musicians, this project theorizes the ways music has shaped Romani identity politics in post-Soviet society. Specifically, it analyzes the ways development aid has facilitated social mobility and class formation and examines the impact such changes have had on musical repertoires of urban Roma elites and impoverished Roma in rural contexts.This book also builds on my extensive work as a human rights activist, applied ethnomusicologist, researcher and a professor. Since coming to the University of Pittsburgh in 2008, I have worked with countless students on issues of equality relating to the intersection of music and race, gender, class, disability, and sexuality. I have led Romani music-themed study abroad programs to Central and Eastern Europe and have involved our students in social movements abroad. I have also brought numerous musicians, including the late Esma Redzepova, for performances at the University of Pittsburgh and have used the Carpathian Music Ensemble, which I directed and led from 2008-2018, to draw student attention to the relationship between music, politics, and cultural rights. The dissertations I lead are guided by interests in social equality and global consciousness. I welcome working with students interested in all genres of music who wish to use scholarship for positive social change."