Please see this letter for more information on the series and about how to get involved. For questions, please email charlemos@pitt.edu

The Limits of Judicialization: From Progress to Backlash in Latin American Politics 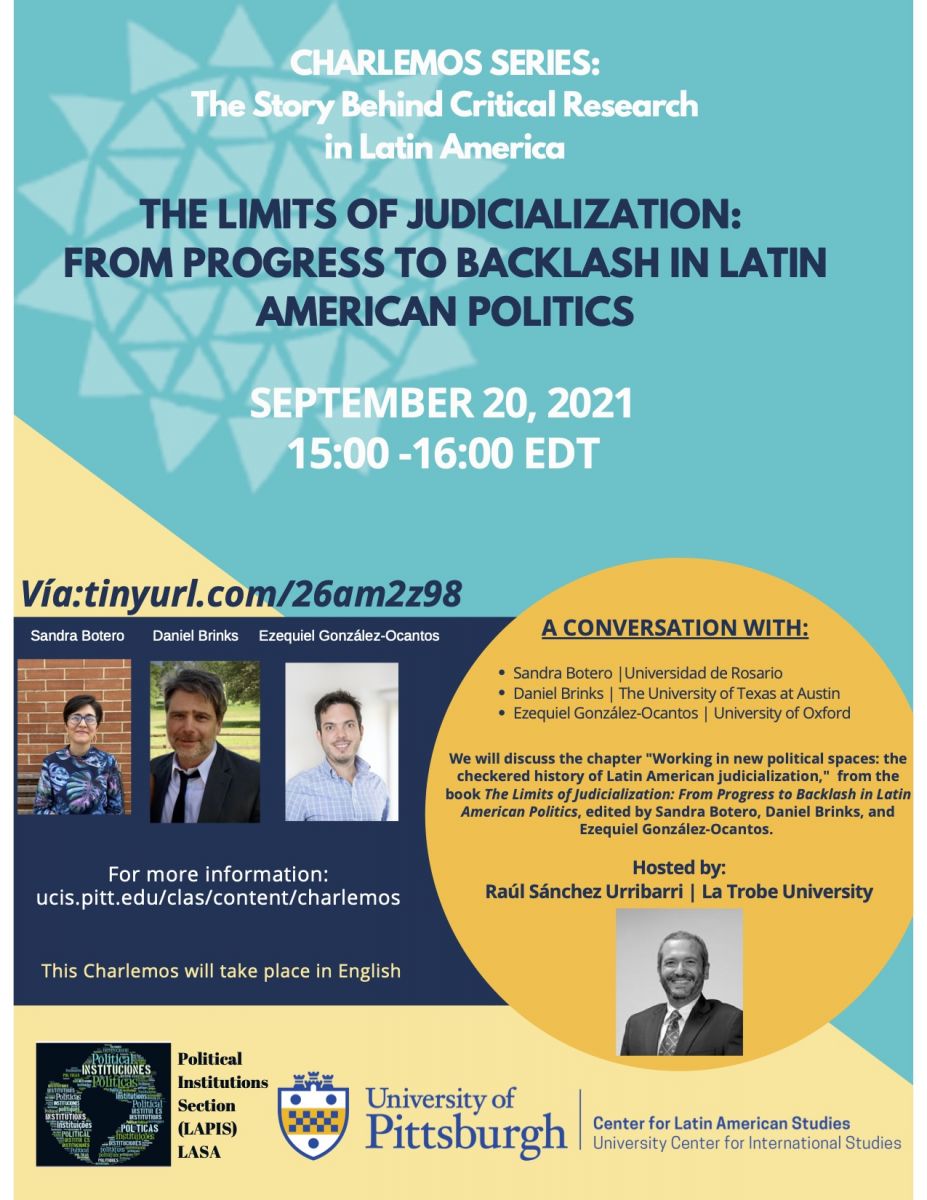 The discussion will be based on the articles  "Contesting Autocracy: Repression and Opposition Coordination in Venezuela" by Maryhen Jiménez (University of Oxford) and "Opposition at the Margins: Strategies against the Erosion of Democracy in Colombia and Venezuela" by Laura Gamboa (University of Utah). The conversation will be moderated by Raúl Sánchez Urribarrí (La Trobe University) in Spanish. 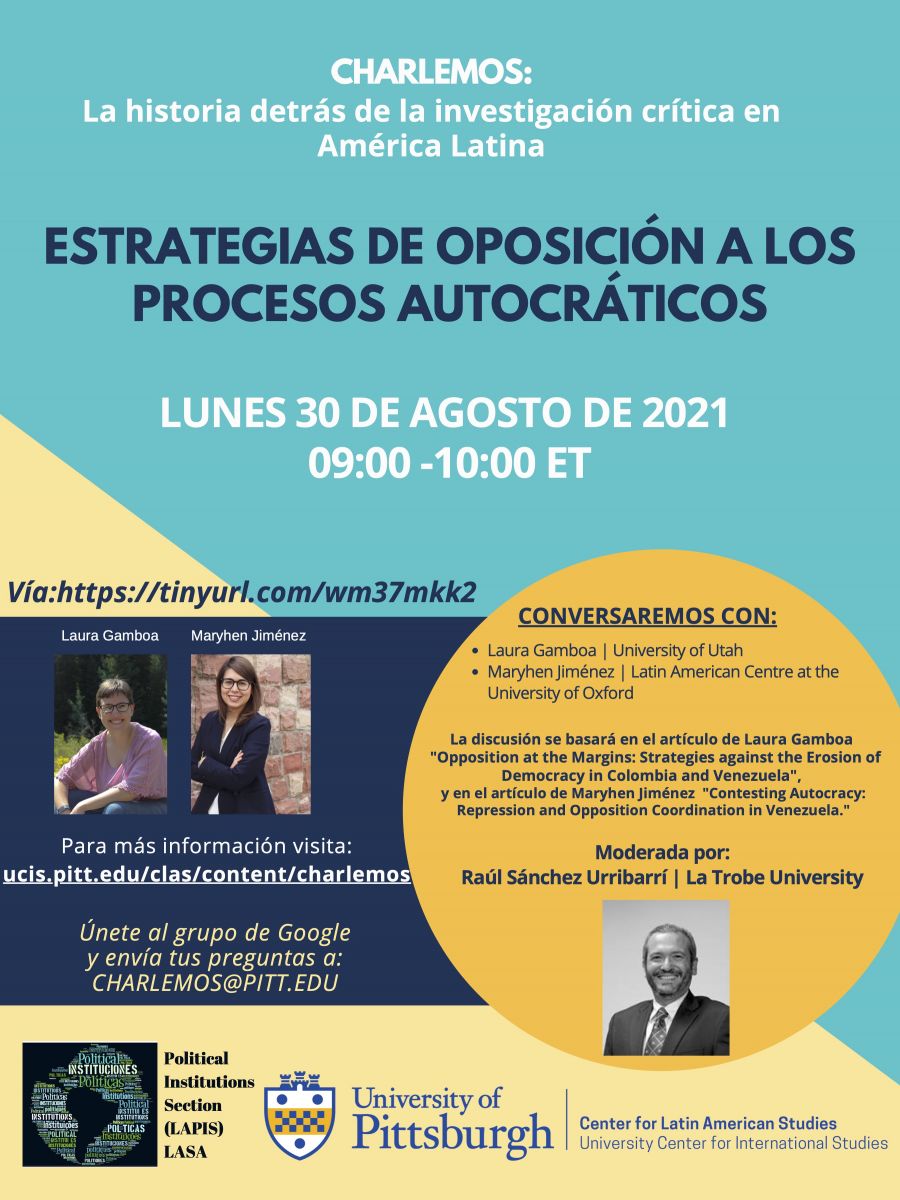 In this edition of Charlemos, we discussed Kwame Dixon's (Howard University) article, "Afro-Latin Social Movements in Latin America and the Caribbean" (in Politics, 2020) and David De Micheli's (University of Utah) article, "Racial Reclassification and Political Identity Formation” (in World Politics 2020). The conversation was moderated by Alisha Holland (Harvard University). 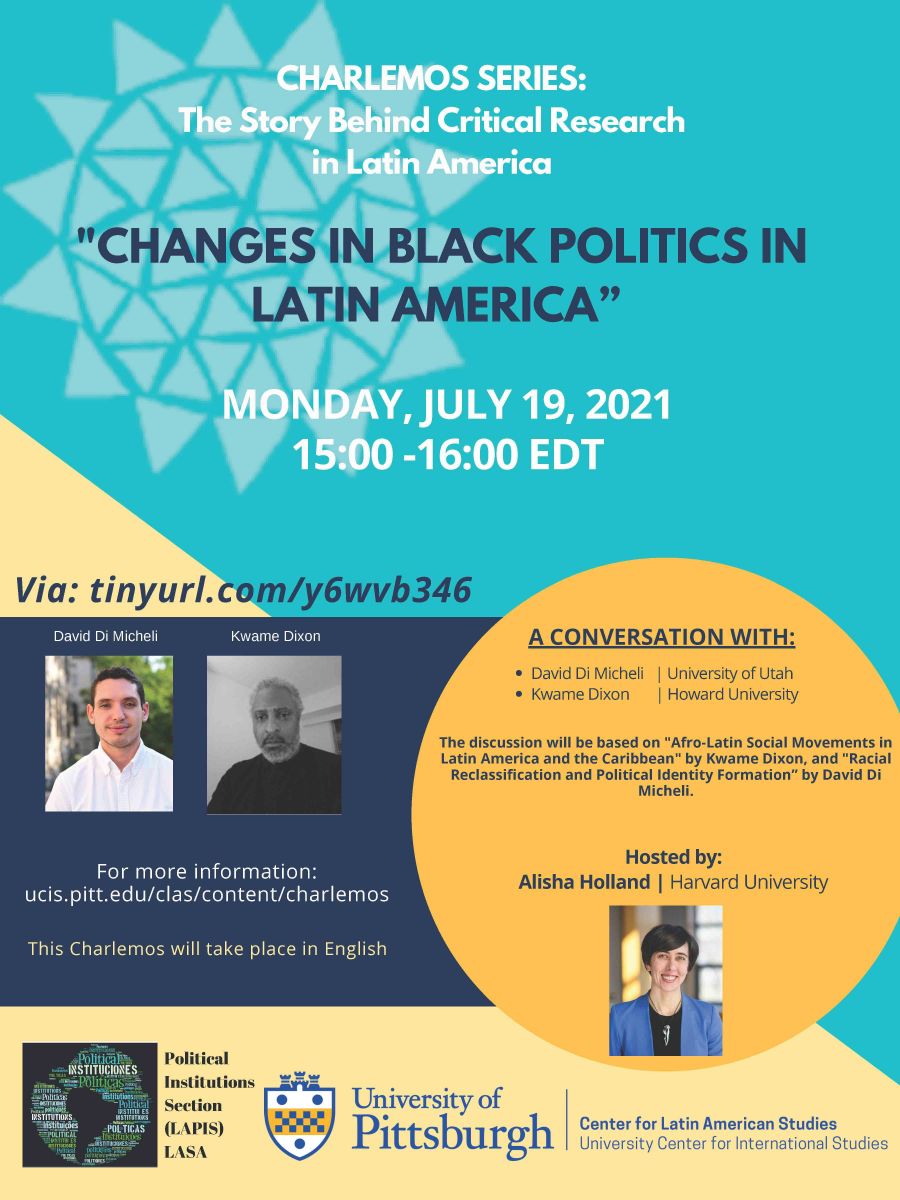 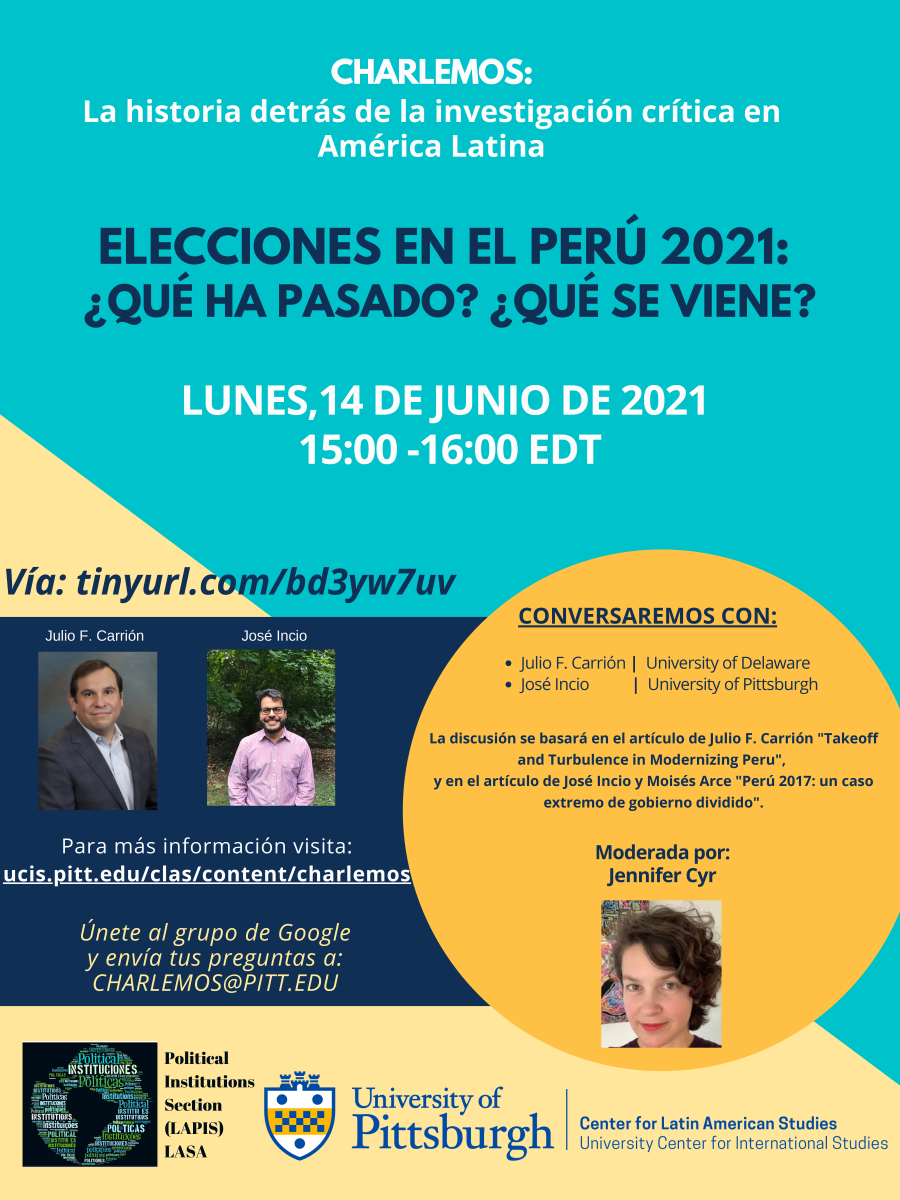 The topic of discussion for the thirteenth Charlemos was "Radical versus Moderate Voters in Latin America." Andrés Mejía Acosta (King's College London) moderated a conversation with Juan A. Moraes (Universidad de la República), Diego Luján (Universidad de la República), and Lucio Rennó. The discussion was based on "The Electoral Success of the Left in Latin America: Is There Any Room for Spatial Models of Voting" (published in LARR), by Juan A. Moraes and Diego Luján, and "The Bolsonaro Voter: Issue Positions and Vote Choice in the 2018 Brazilian Presidential Elections" (published in LAPS), by Lucio Rennó. 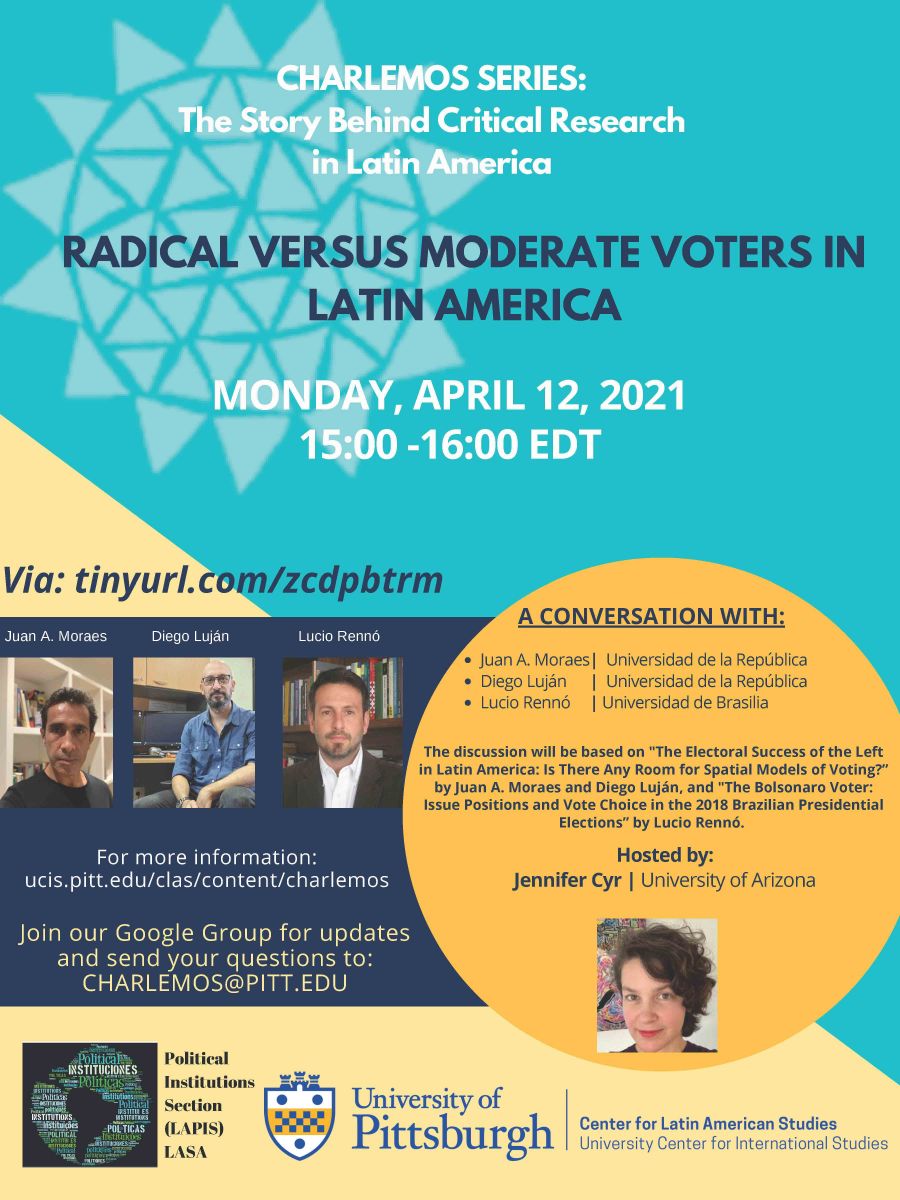 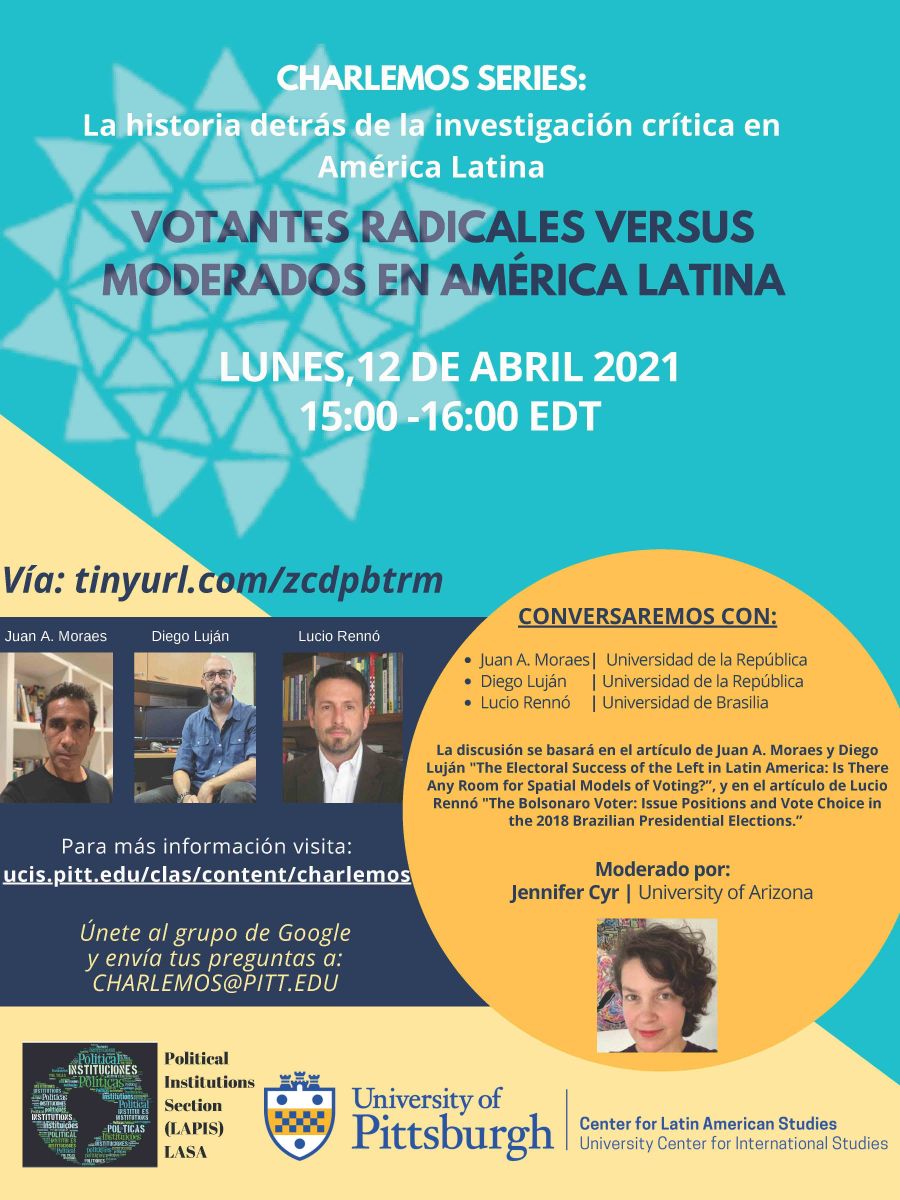 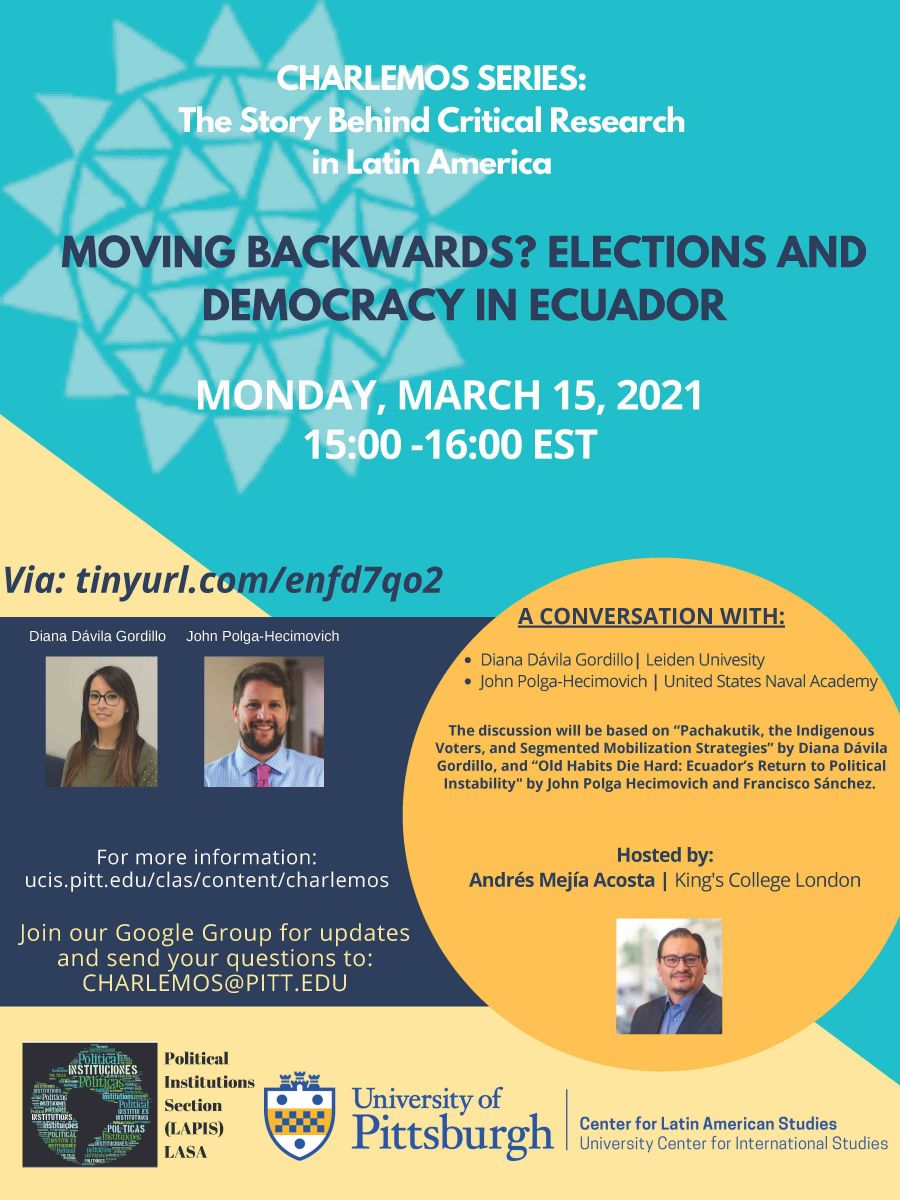 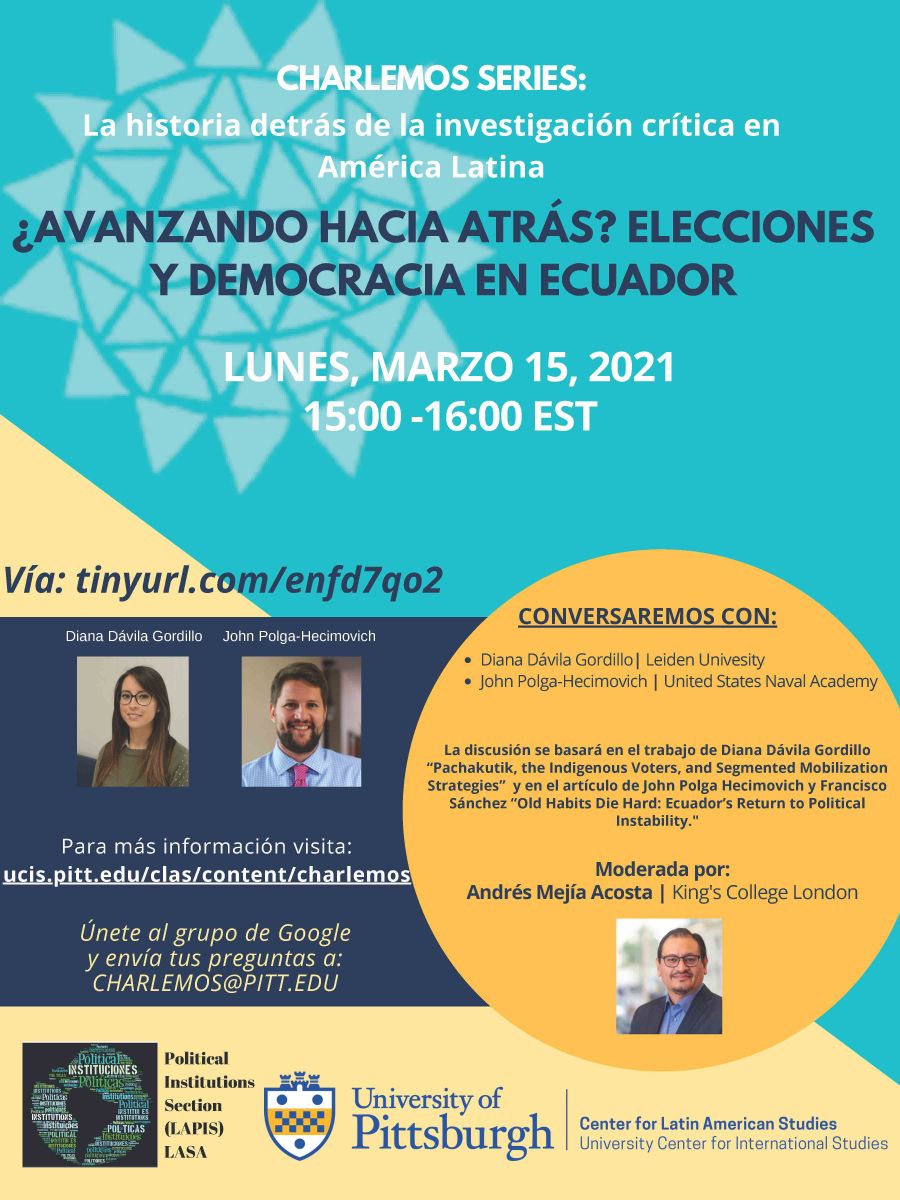 The eleventh Charlemos focused on the topic of "Feminist Movements and Reproductive Rights in the Southern Cone." Jennifer Cyr (University of Arizona) moderated the conversation between Cora Fernández Anderson (Mount Holyoke College), who talked about her new book, Fighting for Abortion Rights in Latin America: Social Movements, State Allies, and Institutions and Mariela Daby (Reed College) and Mason Moseley (West Virginia University) who discussed their new article, "Feminist Mobilization and the Abortion Debate in Latin America: Lessons from Argentina," published in Politics & Gender. 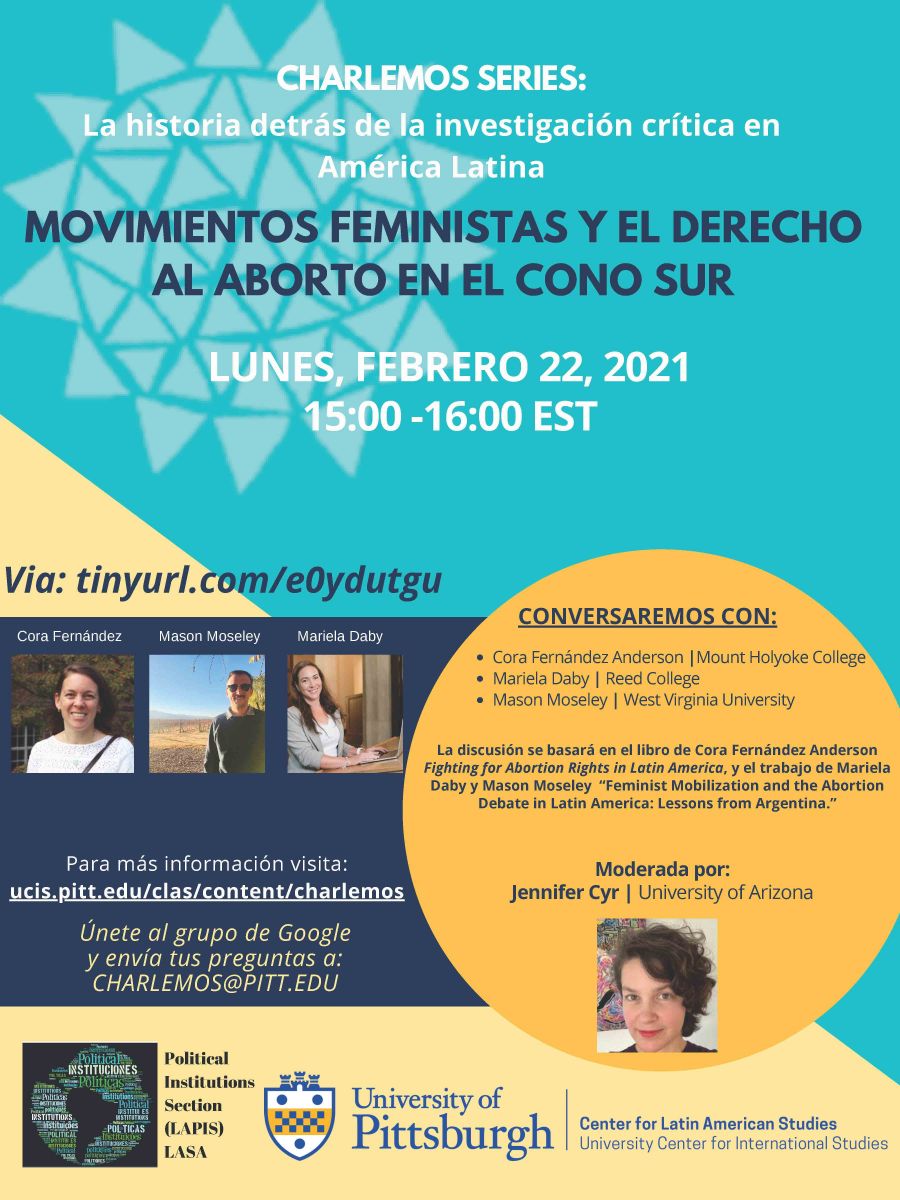 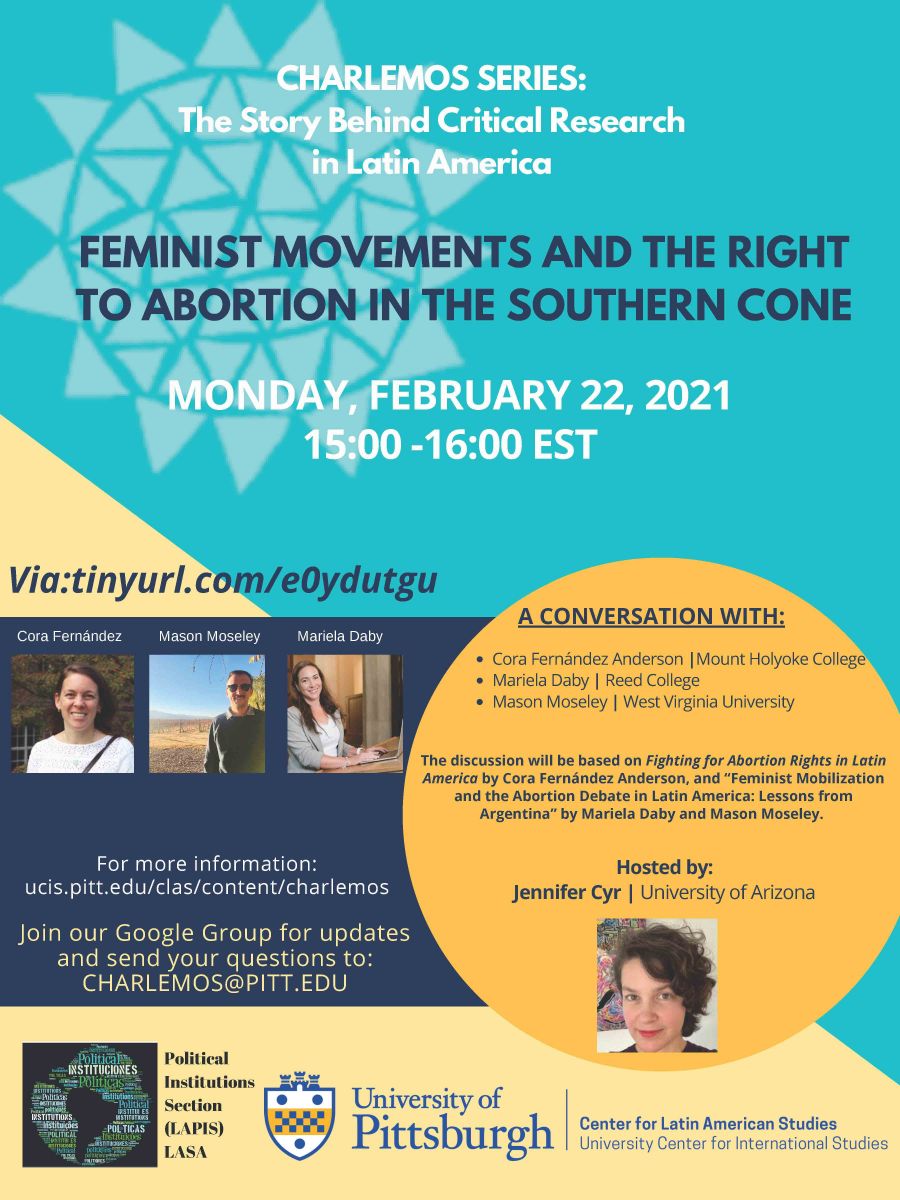 The tenth Charlemos focused on the topic of "China in Latin America: Economic Dependency and Public Opinion". Barbara Stallings (Brown University) discussed her paper, "A Dependency Perspective on the United States, China, and Latin America" and Scott Morgenstern (University of Pittsburgh) discussed his forthcoming paper (co-authored with Asbel Bohigues, University of Salamanca), "Battling for the Hearts and Minds of Latin Americans: Covariance of Attitudes Towards the United States and China." Javier Corrales (Amherst College) moderated the discussion.

Papers are available to read here: 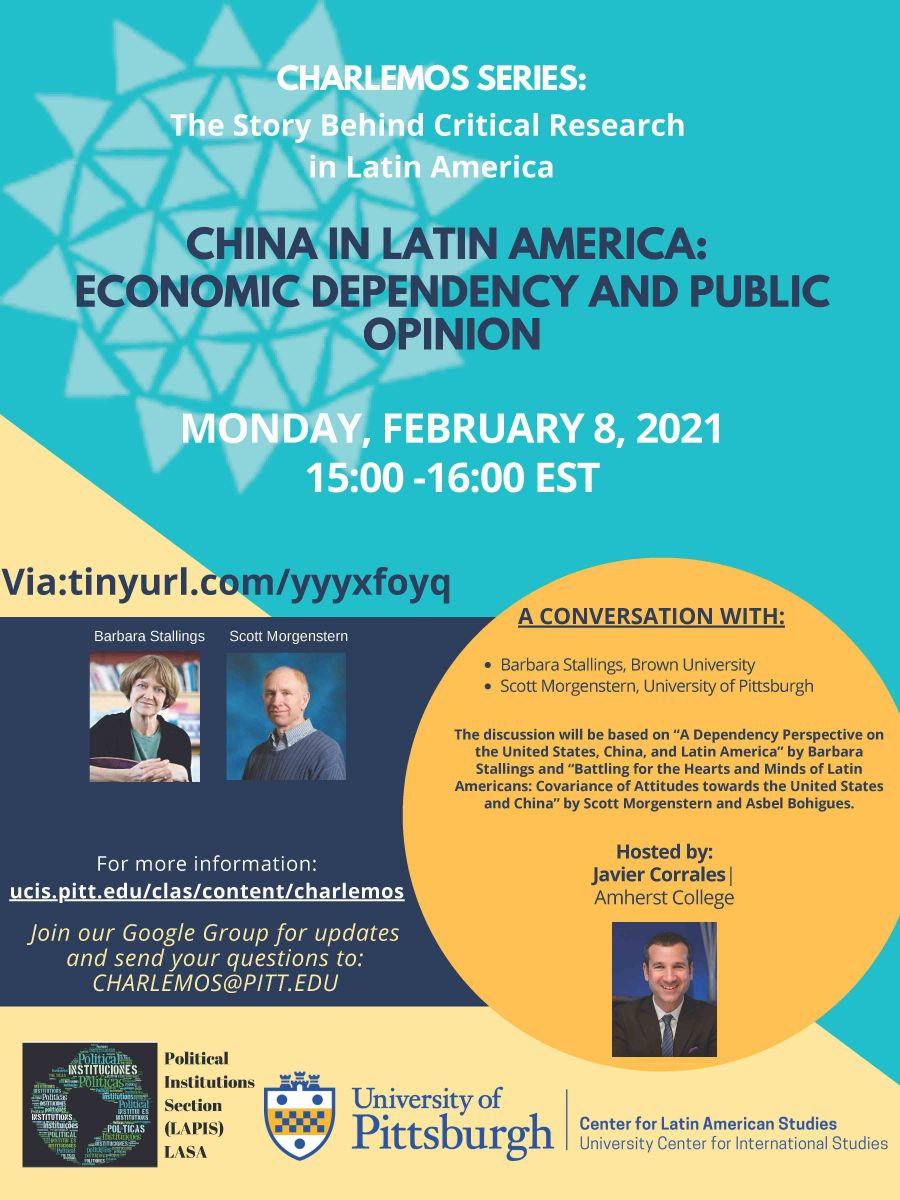 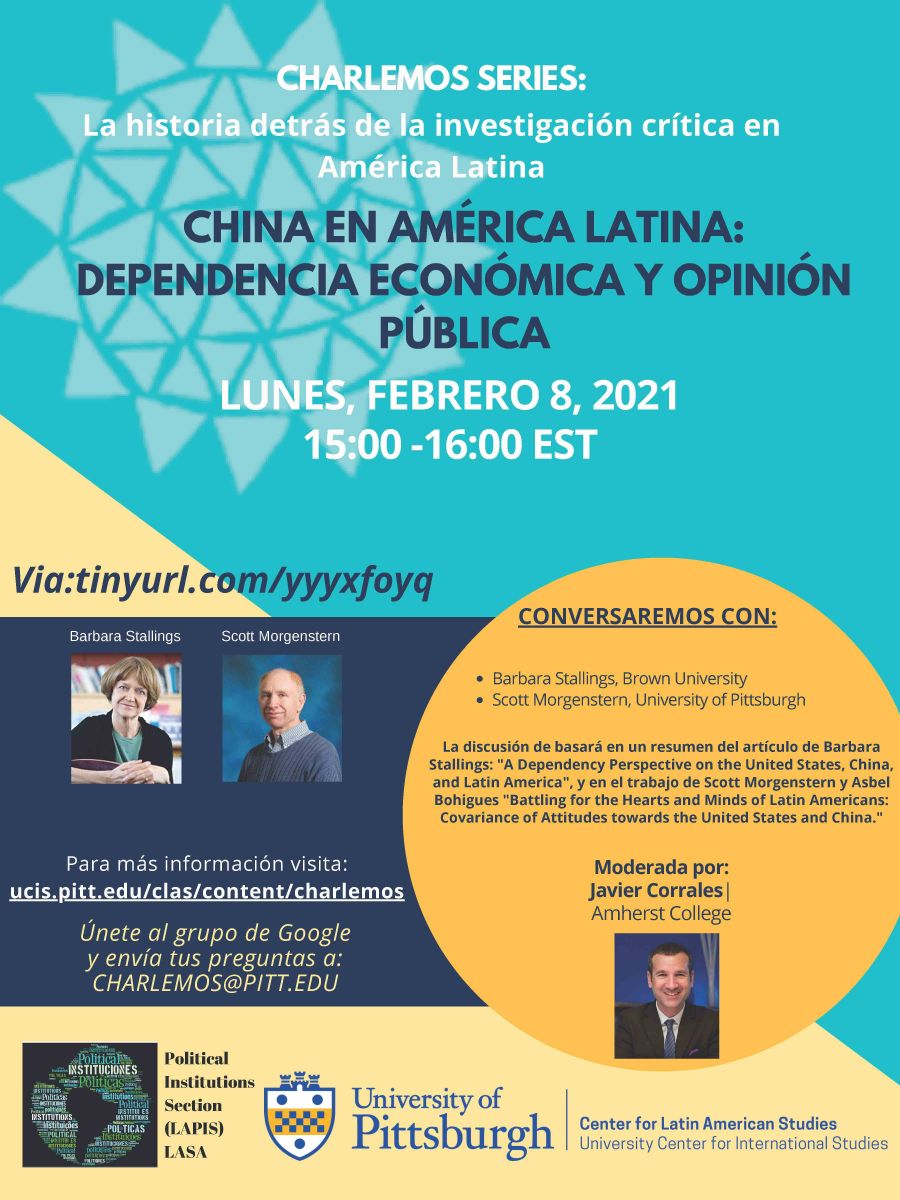 The ninth Charlemos focused on the Special Edition Issue of America Latina Hoy, "Venezuela: Political Conflict and Economic Collapse". We talked with the editors and authors: José Manuel Puente, Susanne Gratius, and the director of the journal, María Ángeles Huete Garcia. Benedicte Bull (University of Oslo) moderated the conversation. 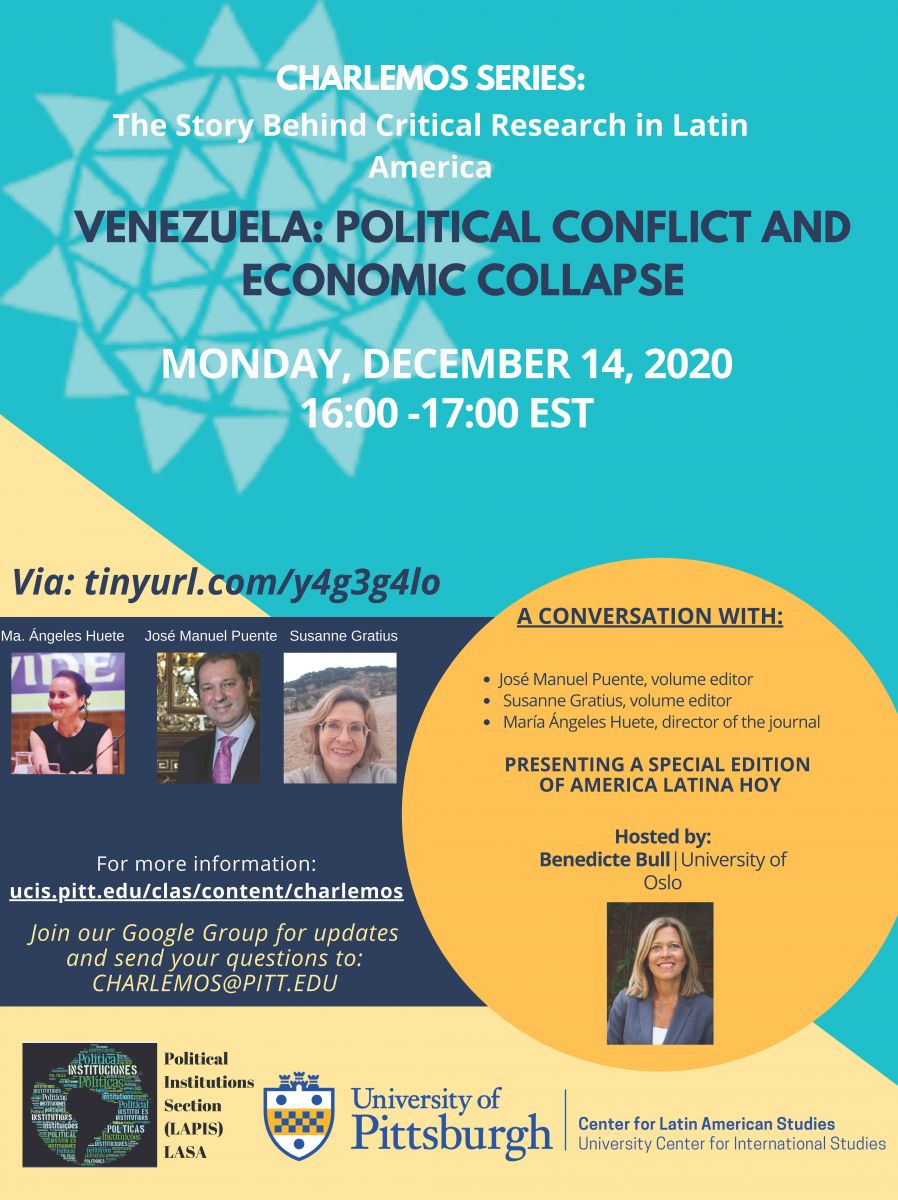 In the eighth Charlemos, Scott Morgenstern (University of Pittsburgh) moderated a discussion between Jennifer McCoy (Georgia State University) and Stefano Palestini (Pontificia Universidad Católica de Chile). The discussion was based on Thomas Legler and Jennifer McCoy's, "Games People Play: International Regime and the Venezuelan Political Crisis," presented at LASA 2016 and Stefano Palestini's, "Regional Organizations and the Politics of Sanctions Against Undemocratic Behaviour in the Americas," published in International Political Science Review, 2020. 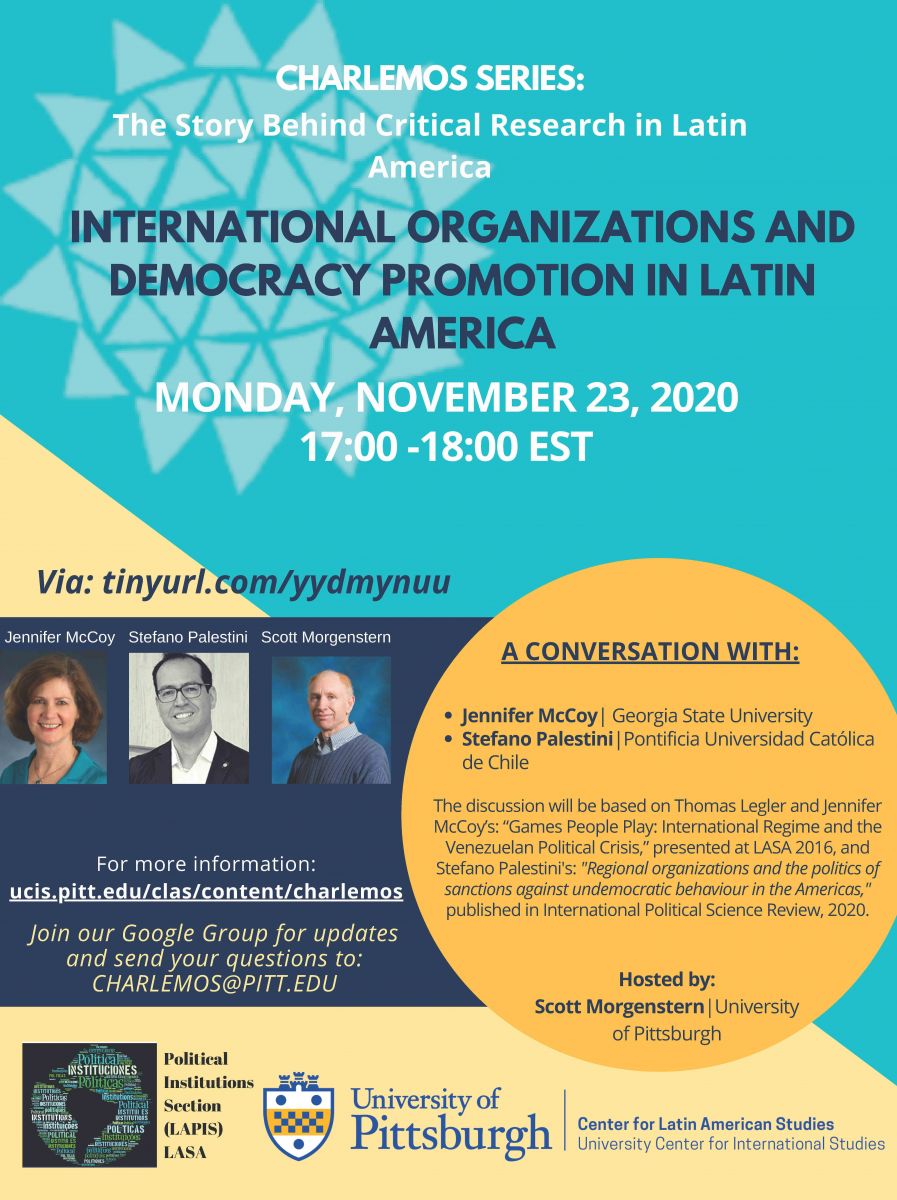 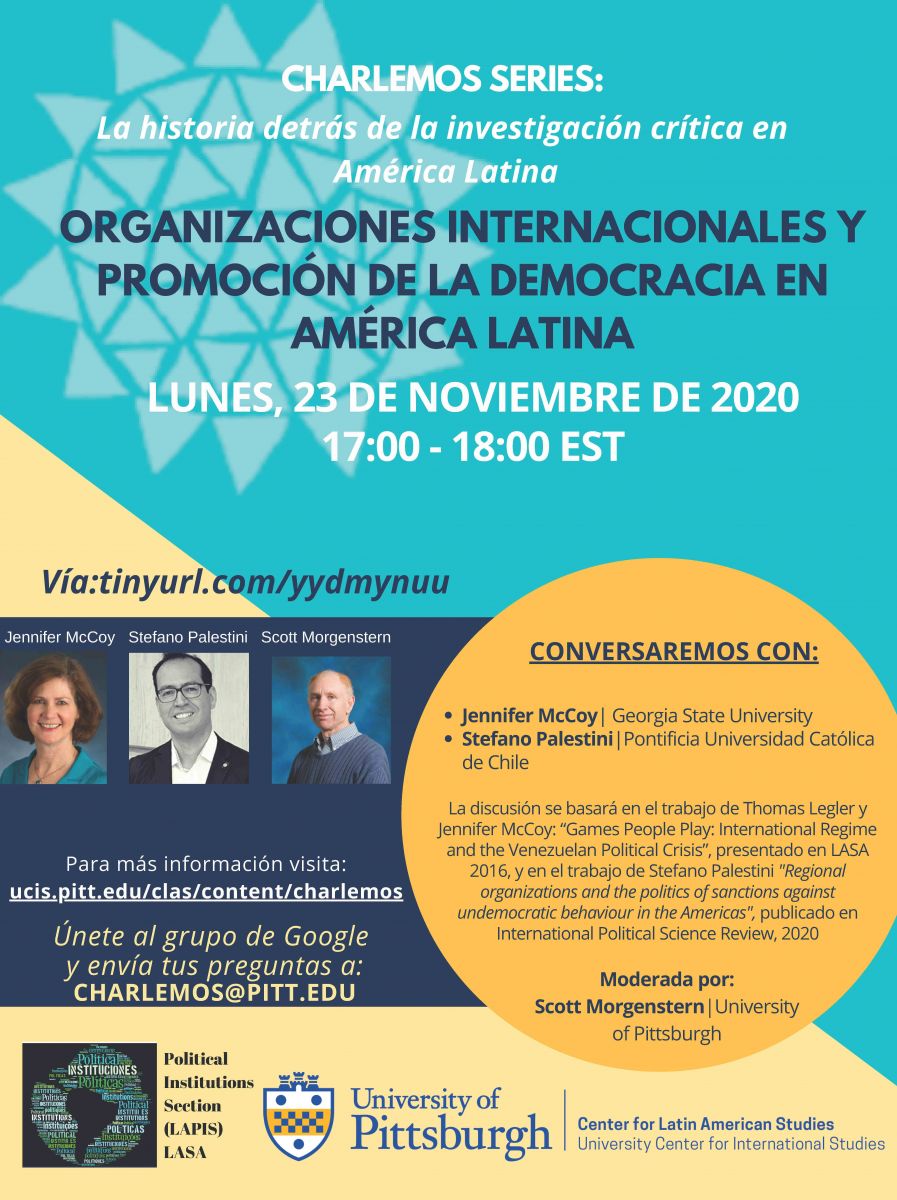 Populism in the Americas

In the seventh Charlemos, Victoria Murillo (Columbia University) moderated a discussion between Kurt Weyland (University of Texas at Austin) and Steven Levitsky (Harvard University) on the topic of "Populism in the Americas". They delved into comparisons between Trumpism and Populism in Latin America 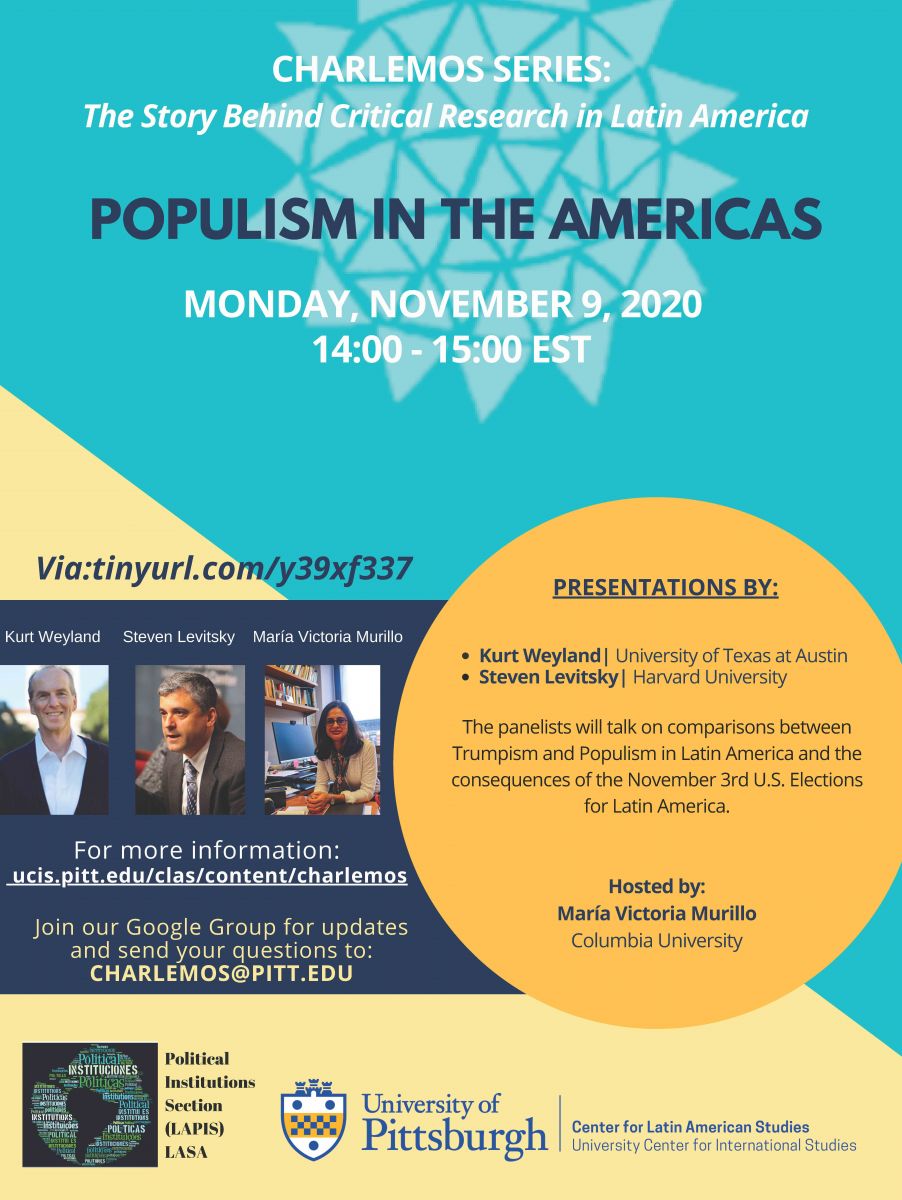 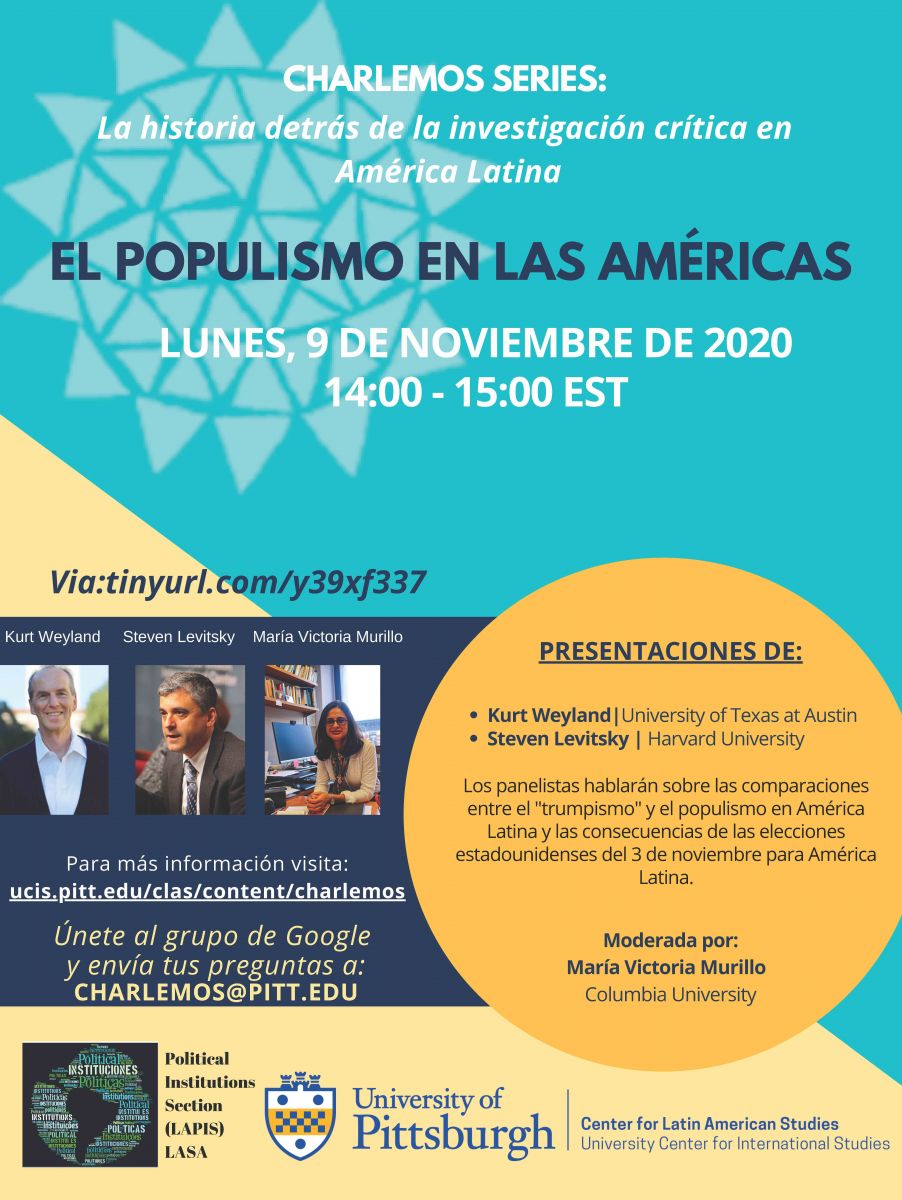 The sixth Charlemos was co-sponsored by the Department of Political Science at the University of the Andes. Raul Sánchez-Urribarri (La Trobe University, Melbourne, Australia) moderated the discussion with Angelika Rettberg (Universidad de los Andes), Sandra Botero (Universidad del Rosario), and Laura Gamboa (University of Utah) on "Threats to Democracy in Colombia". Angelika Rettberg discussed her article, "Colombia in 2019: The Paradox of Plenty"; Sandra Botero and Laura Gamboa discussed their article, "From Court to Congress: Judicial Power and Legislative Procedure in Colombia." 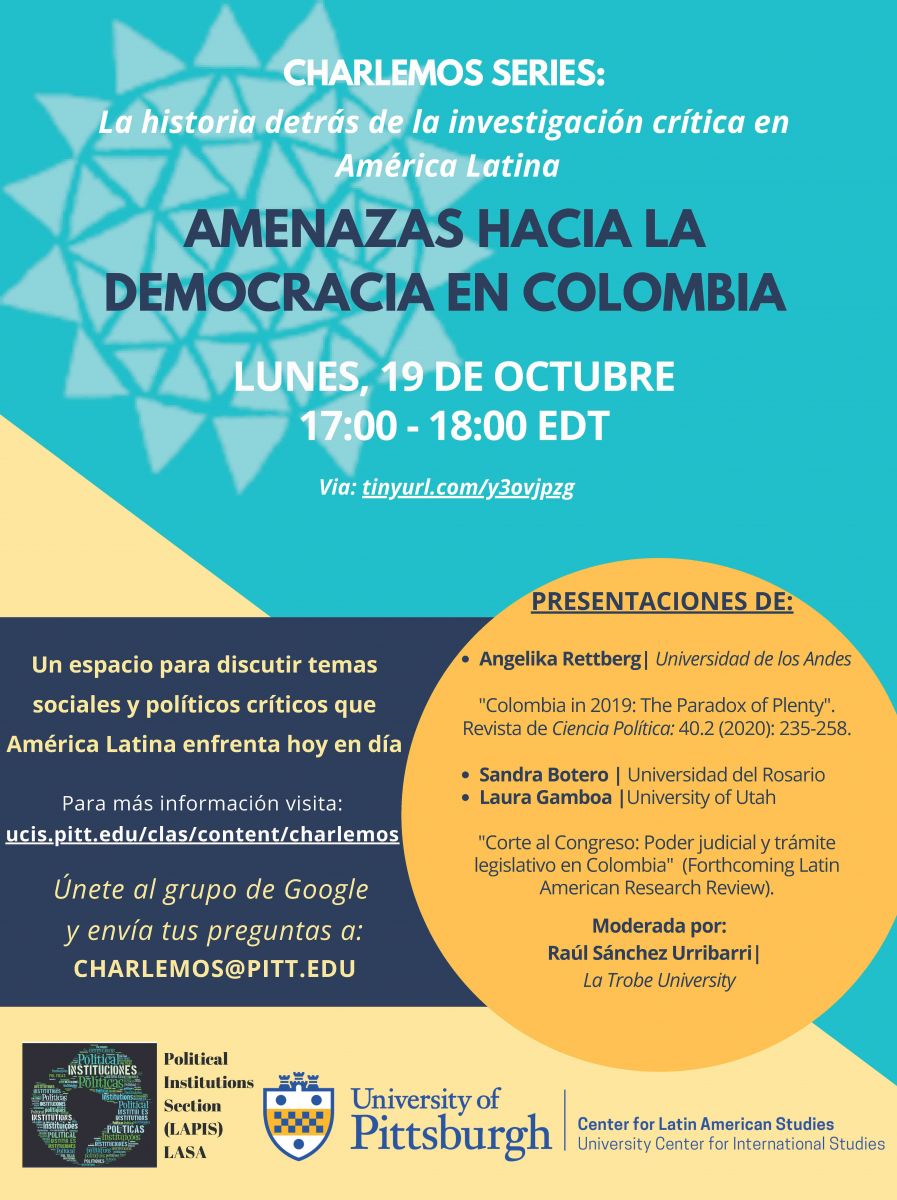 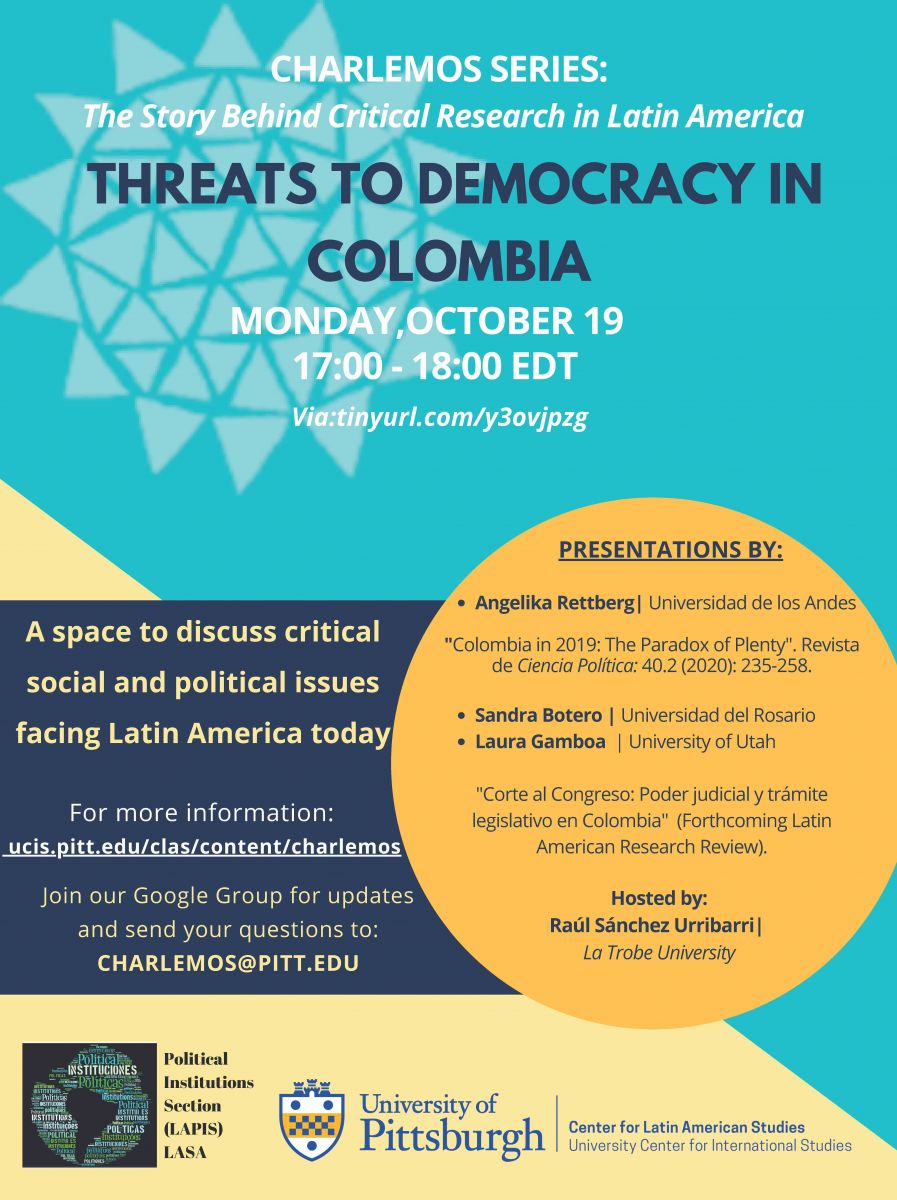 Votes, Drugs, and Violence: Mexico and Beyond

One of the most surprising developments in Mexico's transition to democracy is the outbreak of criminal wars and large-scale criminal violence. Why did Mexican cartels go to war as the country transitioned away from one-party rule? And why have criminal wars proliferated as democracy has consolidated and elections have become more competitive subnationally? In Votes, Drugs, and Violence, Guillermo Trejo and Sandra Ley develop a political theory of criminal violence in weak democracies that elucidates how democratic politics and the fragmentation of power fundamentally shape cartels' incentives for war and peace. Drawing on in-depth case studies and statistical analysis spanning more than two decades of multiple levels of government, Trejo and Ley show that electoral competitiion and partisan conflict were key drivers of the outbreak of Mexico's crime wars, the intensification of violence, and the expansion of war and violence to the spheres of local politics and civil society. 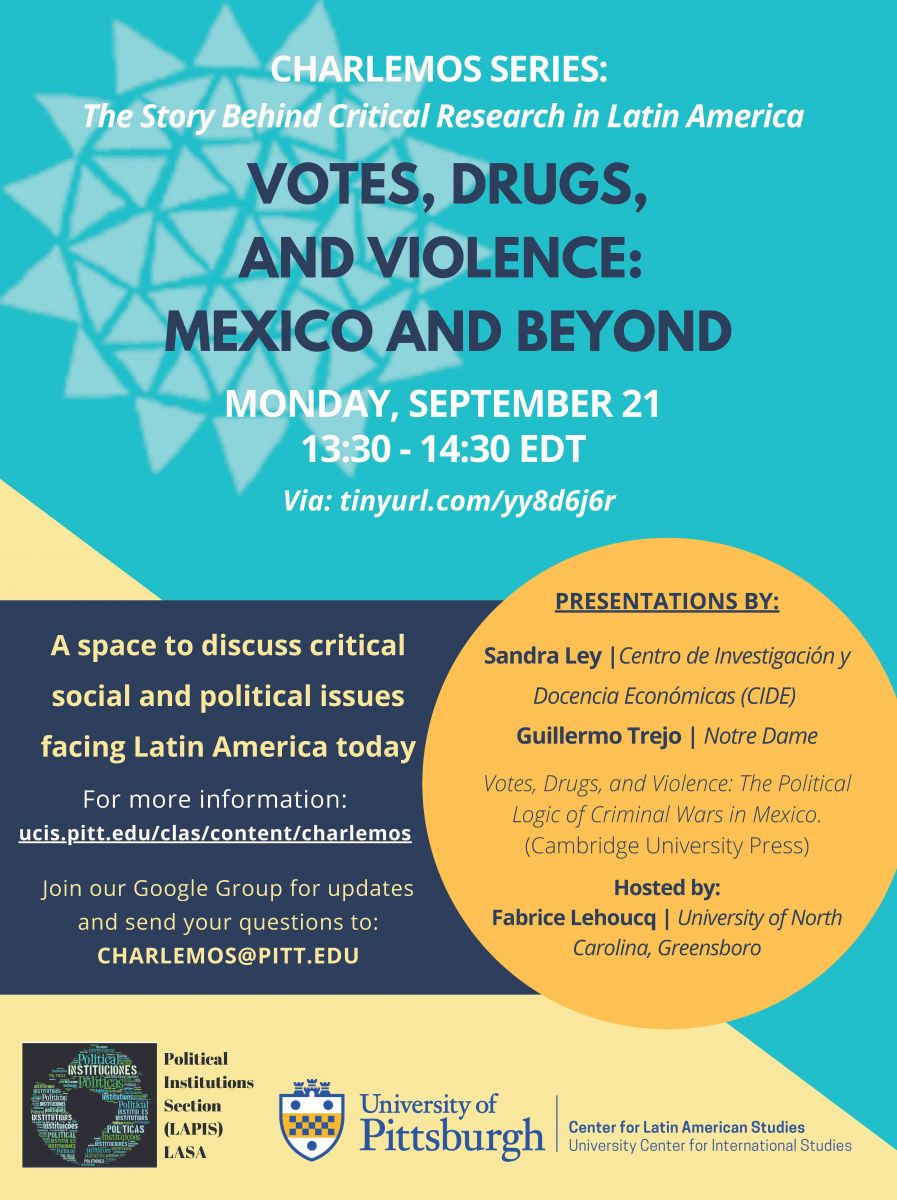 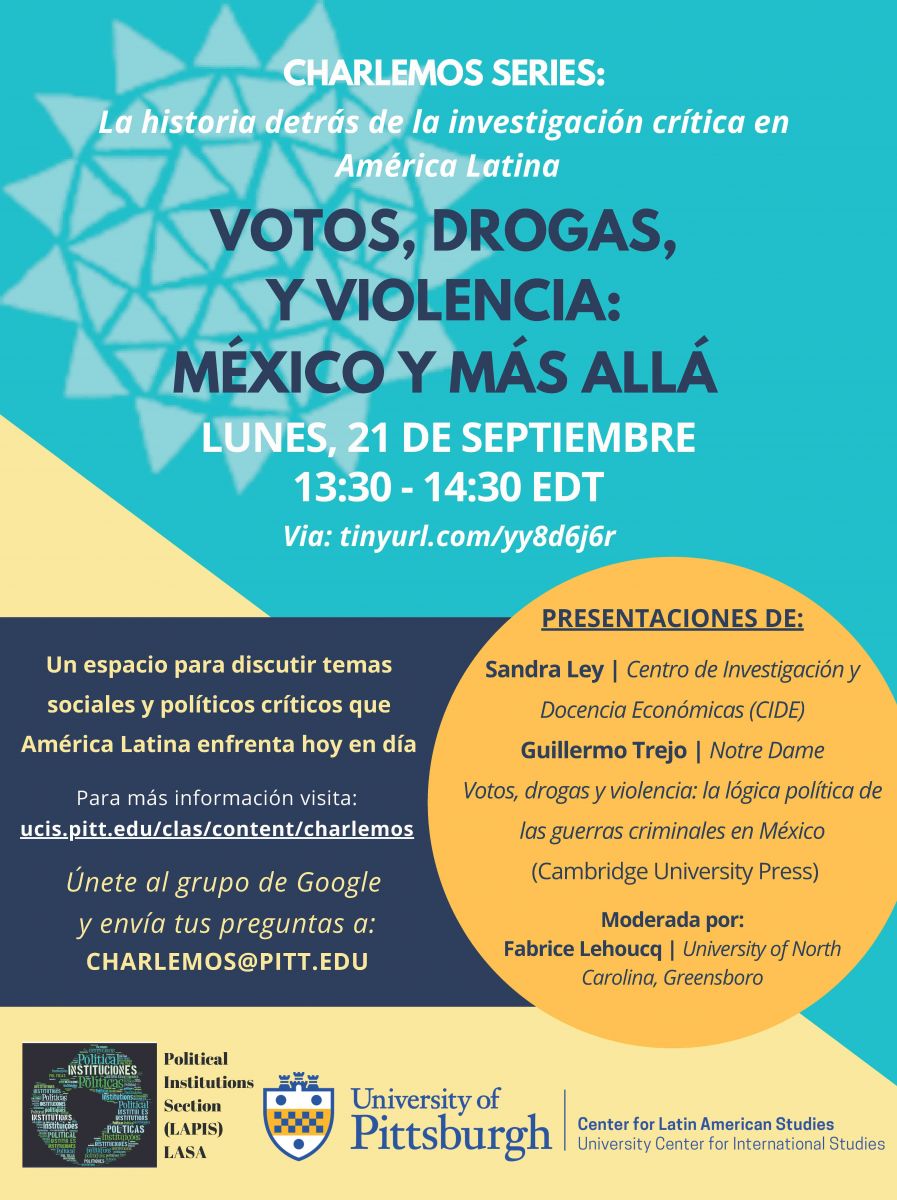 In the fourth Charlemos, Javier Corrales (Amherst College) moderated a conversation with Amy Erica Smith (Iowa State University) and Taylor C. Boas (Boston University) on "Religion, Sexuality Politics, and Voting Behavior in Latin America". The talk was based on a paper by the same title that was written for the 2020 APSA. See the abstract and link to the paper below:

Right wing candidates have rallied against same-sex marriage, abortion, and "gender ideology" in several recent Latin American elections, drawing strong support from socially conservative voters. Yet in other parts of the region, these issues are largely irrelevant to voting decisions. Drawing on theories explaining partisan shifts in the United States, we argue that elite debates on sexuality politics create conditions for electoral realignment in Latin America. When politicians take polarized positions on newly salient "culture war" issues, masses shift their voting behavior. Using a conjoint experiment in Brazil, Chile, and Peru and region-wide multilevel analysis of the AmericasBarometer and Latinobarómetro, we demonstrate that the rising salience of sexuality politics creates new electoral cleavages in terms of issue attitudes and religion. Whereas scholarship in the United States posits the centrality of partisanship, our findings indicate that sexuality politics prompts realignments even in weak party systems. 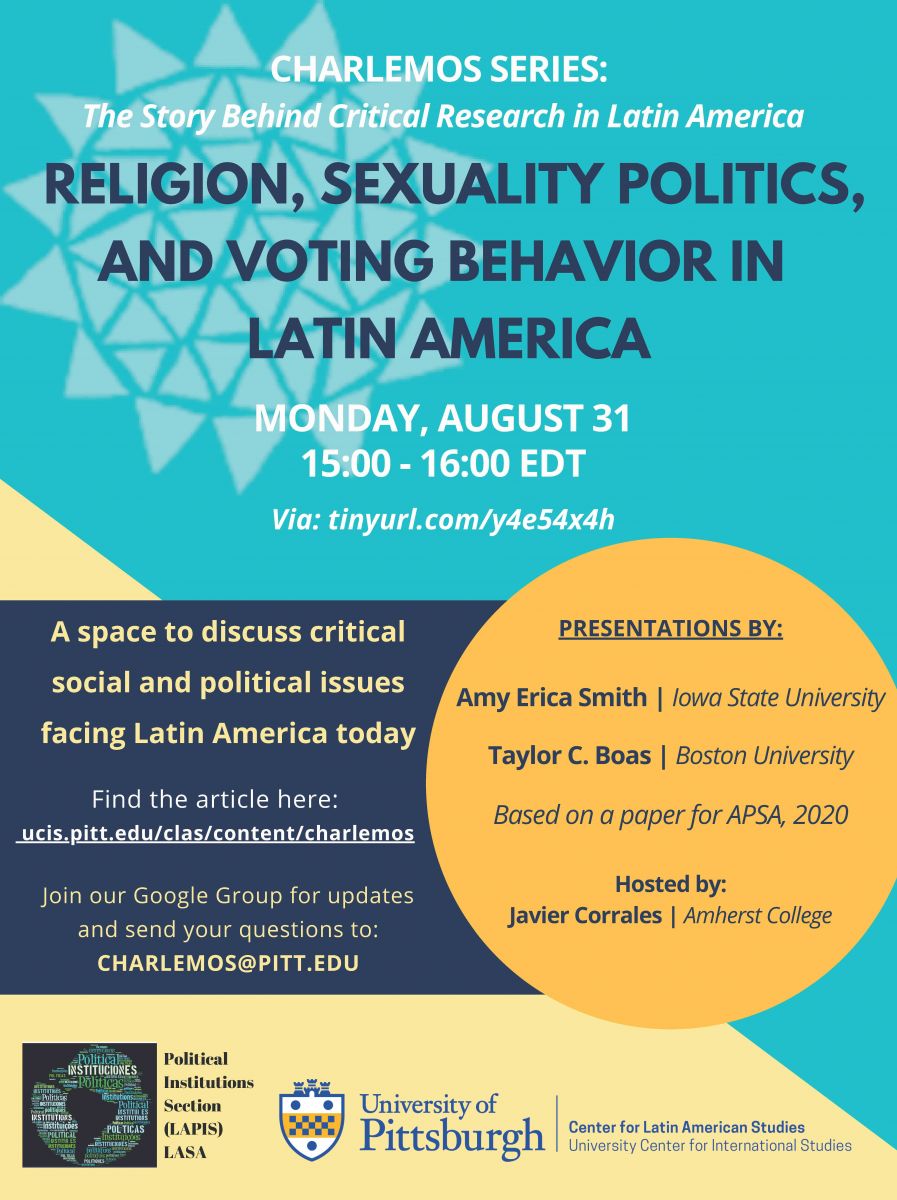 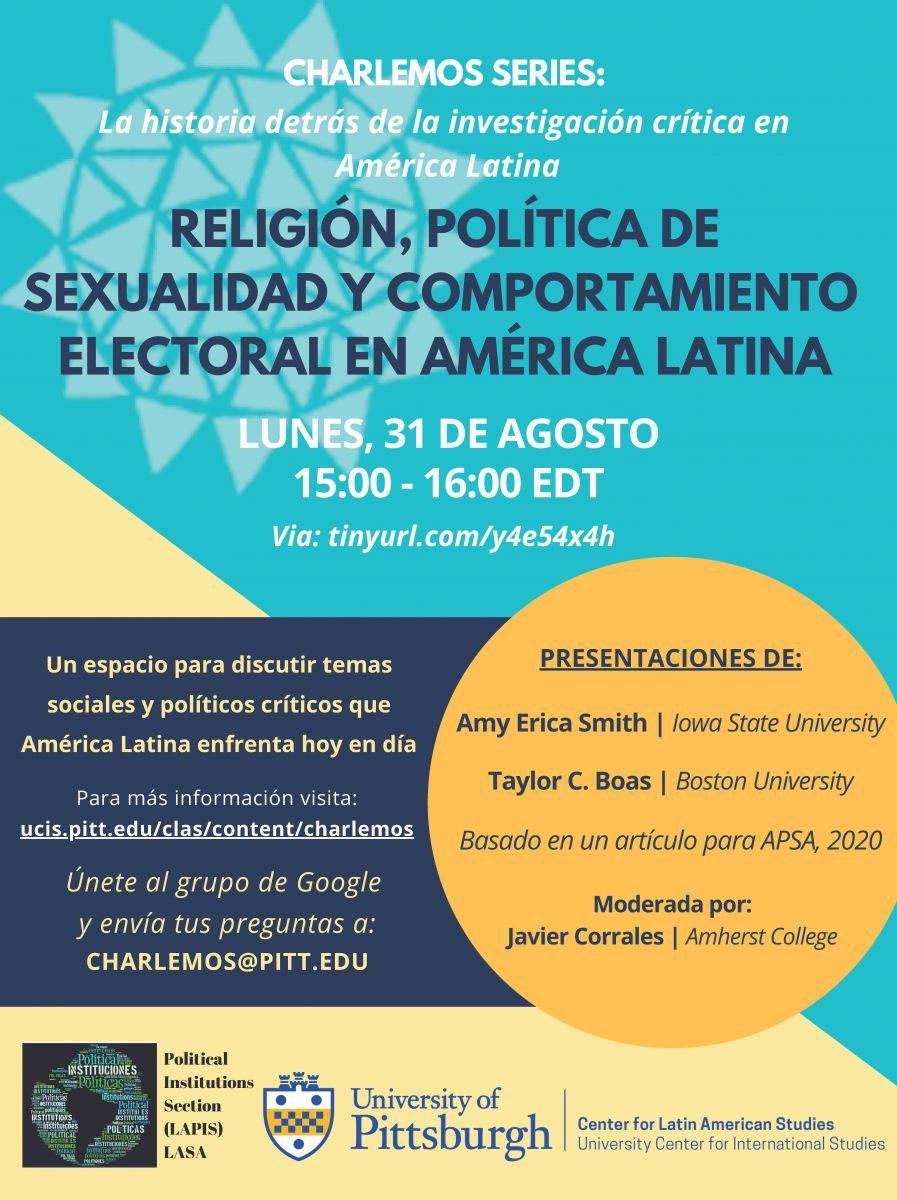 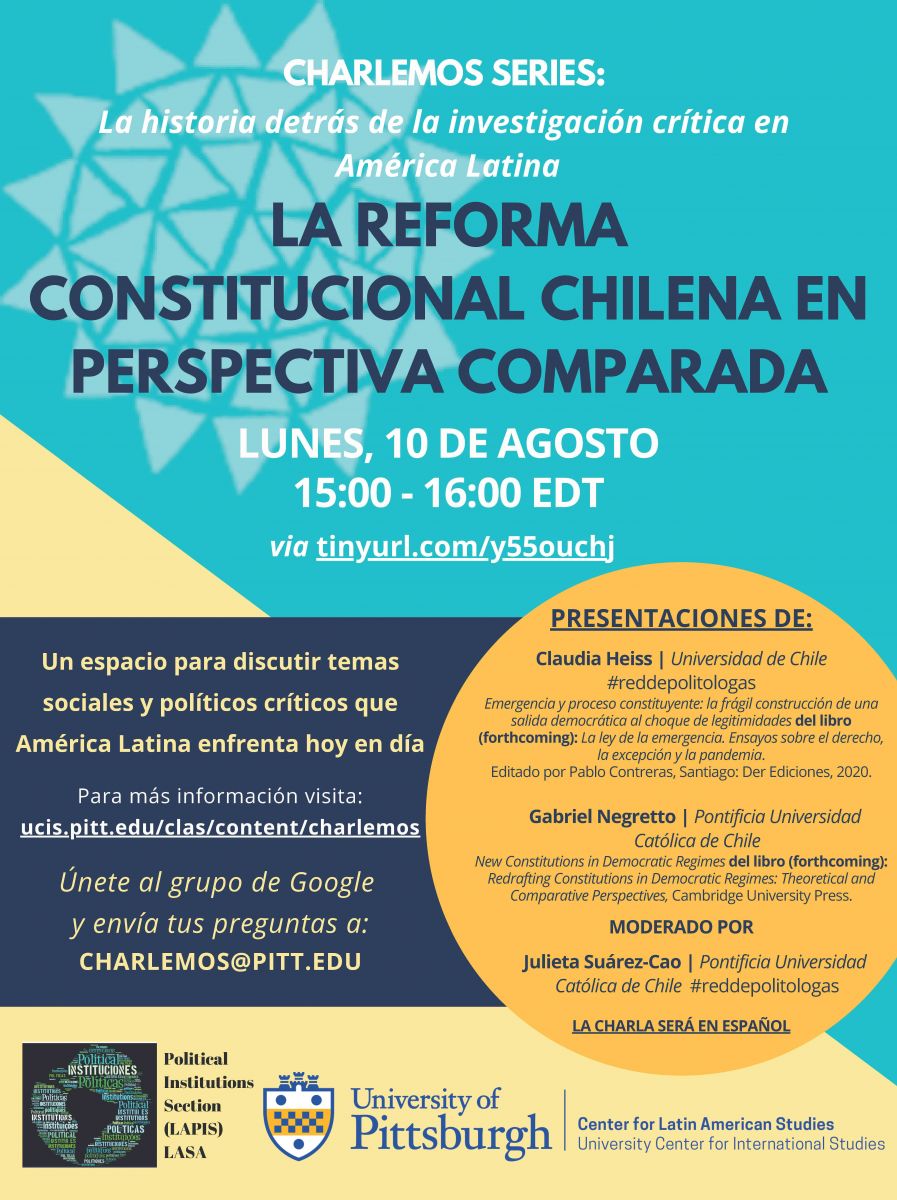 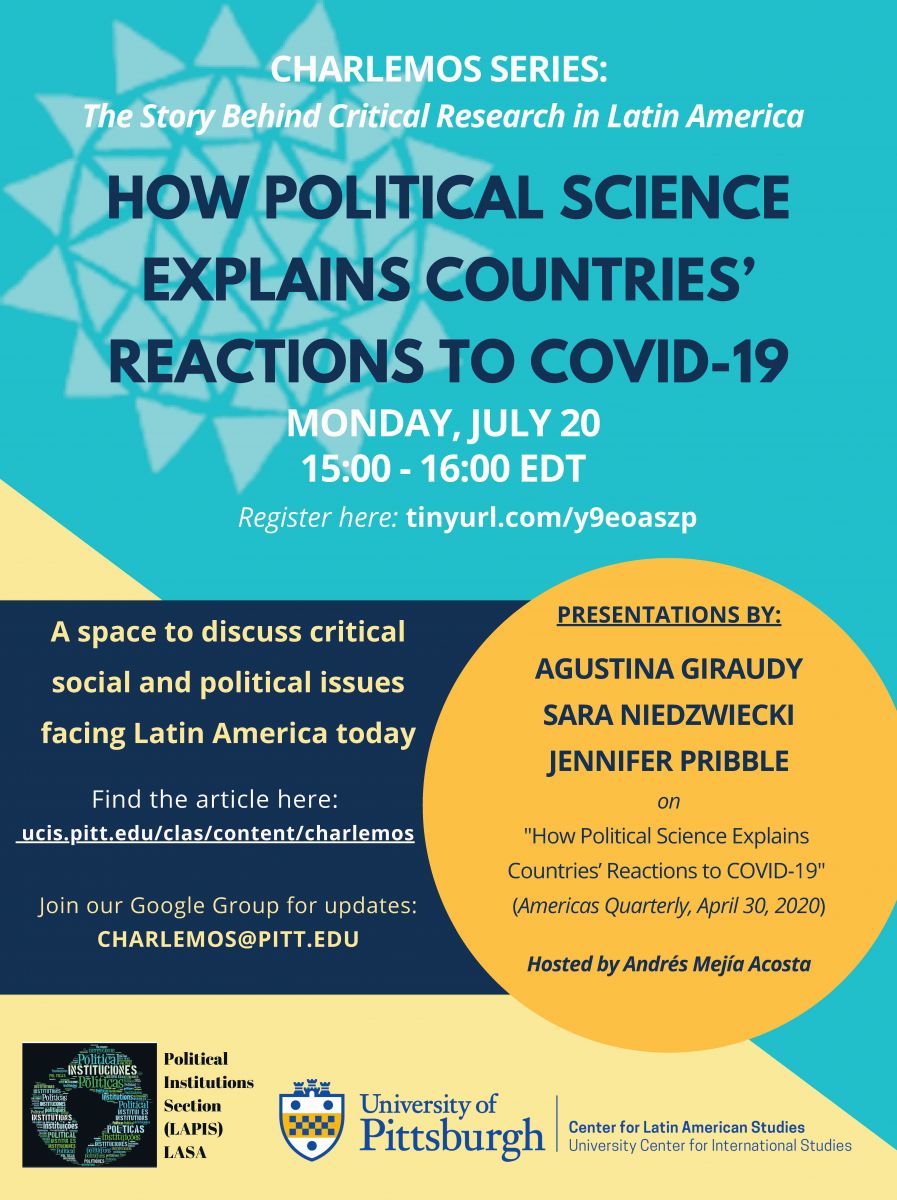 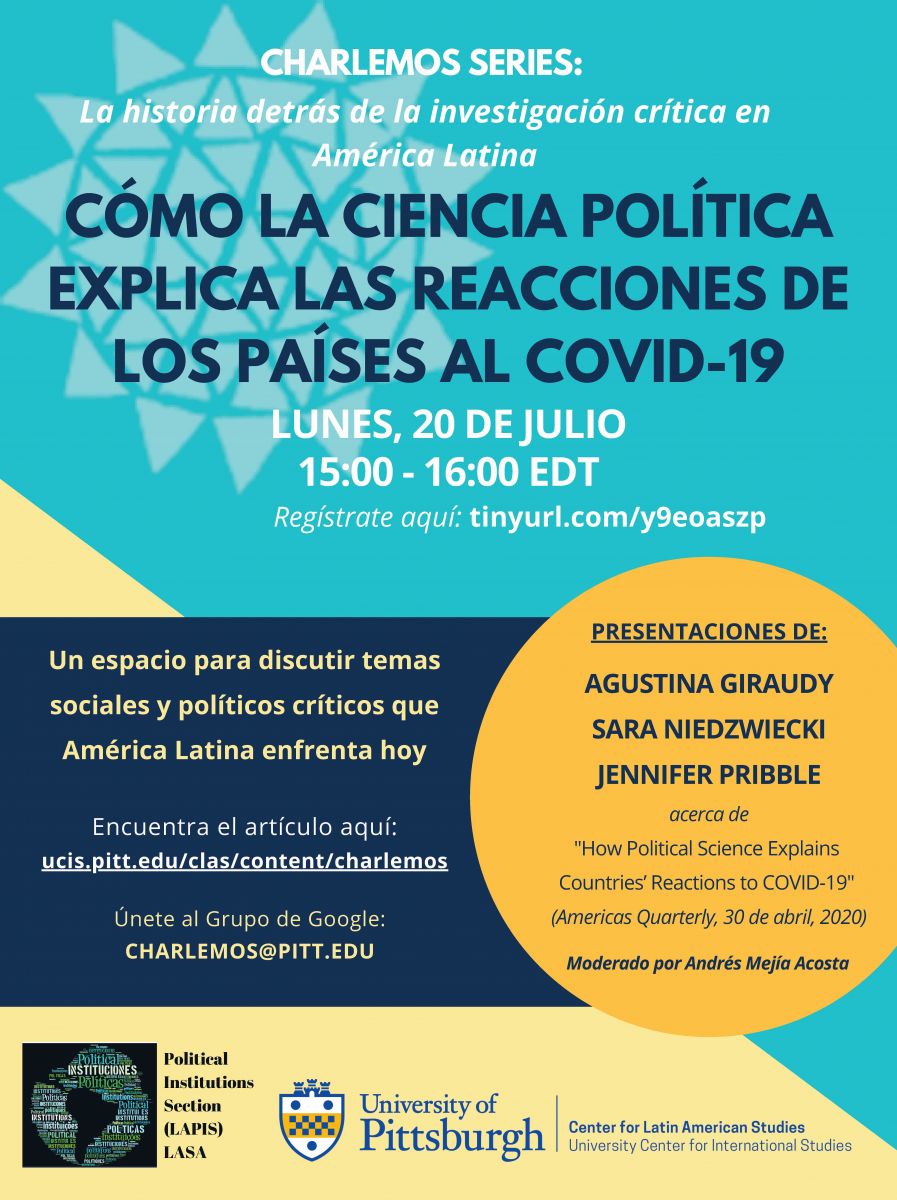 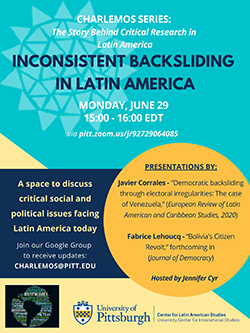 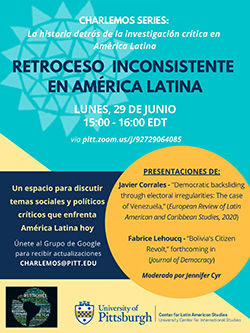