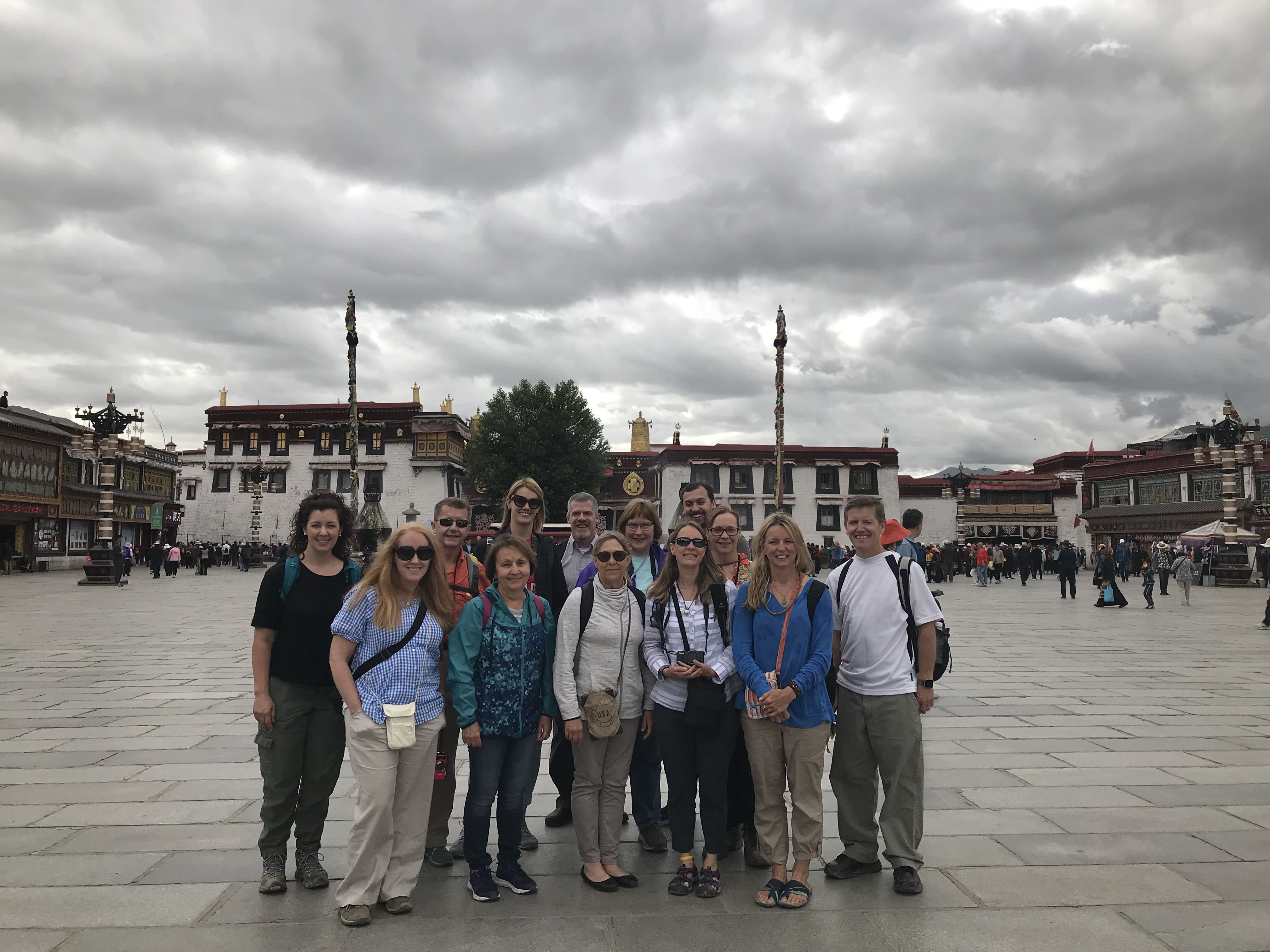 In the summer of 2018, ten teachers (and one spouse) spent two weeks in Tibet and Nepal. Led by Dr. David Kenley (Elizabethtown College) and Dr. Patrick Hughes (University of Pittsburgh) the NCTA study tour--“Looking Beyond Shangri La”--encouraged teachers to get beyond the exotic and romanticized views of the “mythical” Tibet. Dr. Kenley helped teachers to understand the complex relationship between China and Tibet in terms of political history, economic development, and cultural perceptions.  Dr. Hughes provided some background context for appreciating the religious histories of both Tibet and Nepal.

The tour began with a few days in Kathmandu, where the group, led by their excellent Nepali guide “BK,” explored the merchant district of Thamel and Durbar Square, the traditional heart of the city.  While in Durbar Square, they received a blessing from the Kumari, the so-called “Living Goddess,” who is important to the local Newari culture.  The group learned how to make momos (dumplings) at the SASANE project (http://sasane.org.np), a grass-roots woman’s organization that empowers survivors of trafficking. The teachers then made a side trip to the small village of Panauti, where they visited an elementary school, interacted with some of the teachers and students, and spent a night in the homes of some local families.

After a short plane trip over the Himalayas (where the summit of Everest was seen peeking through the clouds), the group arrived in the Tibetan city of Lhasa.  The teachers spent a few days in Lhasa, where they did a kora (pilgrimage) around the Barkhour Square, and joined the throngs of Tibetan pilgrims through the Jokhang Temple (the holiest site in Tibet).  Following in the footsteps of the Dalai Lamas, the teachers toured the iconic Potala Palace (the historical seat of religious and political power in Tibet) and the Norbulingka, the Dalai Lama’s summer palace. At the Sera monastery they got to see young Buddhist monks (of the Gelukpa order) engaging in physically animated philosophical debates.

After a few days in Lhasa, the teachers set out to explore other parts of the Tibetan countryside, which took the group through numerous high-mountain passes that revealed lush green valleys ornamented by startlingly yellow rapeseed flowers in bloom.  Yamdrok Tso (the Turquoise Lake), one of the holiest lakes in Tibet, was a brief but meaningful stop, as everyone appreciated the interplay of blues between the sky and the waters.  In the city of Gyantse the teachers were invited into the home of a textile weaver, who served up steaming cups of yak butter tea (which was not to everyone’s liking) while she showed us her craft.  For many on the tour, the most anticipated (and feared) part of the whole tour was a visit to Mt. Everest Base Camp.  While the accommodations at the nearby Rongbuk Monastery (the highest monastery in the world, at 17,000 feet elevation) were rustic, it provided excellent views of the summit of Everest. A few members of the group even got serendipitously recruited to help locals install a new floor in one of the monastery’s buildings.

The group’s final monastery visit was to the Tashilhunpo Monastery, the seat of the Panchen Lama, in the city of Shigatse.  The teachers performed the long kora around the monastery, spinning the seemingly endless array of prayer wheels and enjoying the Buddhist iconography painted on the mountain-side. Then a bit of shopping for souvenirs and teaching materials in Shigatse’s open air markets.

For a blog of the tour, including lots of photos please visit: https://www.eagle.pitt.edu/blog/2018